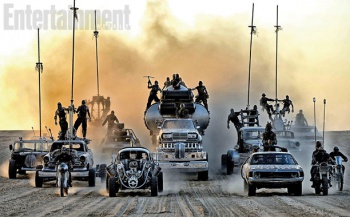 Comic-Con belongs to the Mad (Max).

By the time the latest in the Mad Max series hits theaters in 2015, it will have been 30 years since we've had a new Mad Max movie. So why did director George Miller return to the franchise after so long? "The story popped into my head and wouldn't go away," Miller told Comic-Con crowds. Mad Max: Fury Road reimagines the world of Mad Max with a new cast (with Tom Hardy as Max) on an all-new adventure. The movie, Miller explains, is essentially one huge car chase -- "For some reason I really love wrecking cars," the director said.

And the movie (at least based on the footage we were shown) contains a lot of them. The film is all action, with a visual style that feels like it's come out of a comic -- in part because the entire film was storyboarded comic book style over 3500 panels. The footage itself shows gorgeous -- but desolate -- landscapes, all orange sand and bright blue skies. Shot on location in the Namib Desert, the footage shows a post-apocalyptic collection of surviving vehicles zooming through desert in what can only be described as a series of completely awesome chase scenes. Of course, it's not just one car endlessly following another: there's plenty of crashes and fights (in and on cars) to keep things more interesting than an average day stuck in traffic.

You can get a feel for the world with these new posters or check out the newly released trailer.

You should know from the description alone whether Fury Road is the movie for you (though we'd vote that it's a movie for everyone). The newest chapter of Mad Max is set to land in a theater near you on May 15, 2015.