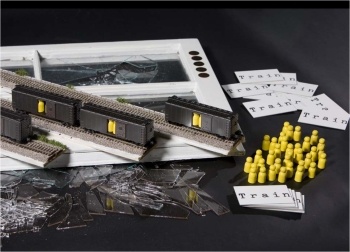 Brenda Brathwaite was in a bit of a rut.

After 28 years in the game industry and a couple dozen titles shipped, she wanted a change of pace. As much as she enjoyed designing games and passing them onto burgeoning teams of programmers, artists and animators, she missed the satisfaction of doing everything herself. Digital games were great and all, but when she played a pair developed by different teams that felt nearly identical, she realized it was time to pull the plug.

Thus began perhaps the most shocking, entertaining and awe-inspiring talk at this year's Triangle Game Conference, "How I Dumped Electricity and Learned to Love Design."

Brathwaite's presentation focused on six experimental tabletop games she created on her short hiatus from digital development and how they re-ignited her passion for game design. The first game came about after a discussion with her 10-year-old daughter about an elementary school lesson on the slave trade. While her daughter had all the facts memorized, Brathwaite was dismayed to learn that she didn't grasp what the Middle Passage was like for the Africans who were kidnapped and shipped across the Atlantic. So she did what any game designer worth her salt would do: She made a game out of it.

Brathwaite assembled a collection of tiny wooden figures, then had her daughter group them into "families." After her daughter was finished, she picked them up by the handful and placed them on a makeshift boat. Her daughter was confused: Why would she take the parents but leave the baby? Why wouldn't brothers stay with their sisters? "No one wants to go," Brathwaite explained. That's when it started to click.

Then Brathwaite devised a primitive resource management mechanic. It took 10 turns for the boat to cross the Atlantic. The boat had 30 units of food. Each turn, the player had to roll a d6, and reduce their food stores by that number. By the trip's halfway point, it was clear to her daughter that her "cargo" wouldn't make it. It wasn't a "fun" game by any means, but it served a different purpose: It helped her daughter intuitively understand the emotional experience of the slave trade, a lesson that numbers on a chalkboard couldn't provide.

At that point, Brathwaite was hooked.

Her subsequent projects dealt with other uncomfortable historical moments. One simulated Oliver Cromwell's invasion of Ireland in the mid-17th century, a game wherein the object wasn't to win, but "to lose the least." But no one in the audience was prepared for her third game, unassumingly titled Train.

The object of Train is to get a collection of people from Point A to Point B by placing them in a boxcar and sending them on their merry way. Played among a group of three people, players draw cards from a pile that can impede other players or free them from existing obstacles. The first player to reach the end of the line wins.

The "game" didn't stop there, however. The game board, pictured above, is an allusion to Kristallnacht - Brathwaite explained that she needed to break a fresh piece of glass each time she "installed" her work in a new location to properly evoke the violence of the experience. She even typed the game's instructions on an actual SS typewriter, which she purchased solely for that purpose.

There were audible gasps in the audience when Brathwaite revealed Train's shocking conclusion; one attendee was so moved by the experience that she left the conference room in tears. But Brathwaite's intention wasn't to invite controversy - just like her game about the Middle Passage, she wanted to create a game that affected people deeply.

Judging from Train's reception so far, she succeeded.