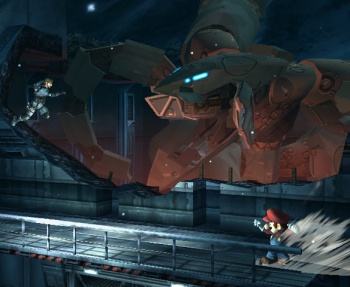 It's no secret that PlayStation All-Stars: Battle Royale bears more than a passing resemblance to Nintendo's famous brawler with a similarly long-winded title, Super Smash Brothers Melee. Even so, Sony's entry to the genre deserves to be judged independently, and for that, you can read our review right here. But while the merits and flaws of PlayStation All-Stars are its own, there's no question that some of the most curious about this title are going to be SSB players. After all, it's been four years since they've seen a new title, and more than ten if you go back to Melee, the last to bolster the cult following for which the series is famous. Many of those players are a pretty serious bunch, and with PlayStation All-Stars positioning to be the first direct "competitor" on the market (albeit for a completely different system), it leaves one simple question on people's minds: If I liked Super Smash Brothers, will I like PlayStation All-Stars?

Of course, no one but you can answer that definitively, but if you're wondering whether or not you've at least got a shot at finding another brawler to eat your life up (or if you're just morbidly curious as to how much of a rip off PlayStation All-Stars actually is or isn't), here are the facts, direct-comparison style:

PSA has built a diverse roster of characters, all from PlayStation's dense library of IPs. Much of the game's appeal is meant to stem from your connection to the character from his or her "home game", and the fun of mastering more than one of them comes from having a history with what's hopefully a good chunk of the lineup.

PSA boasts just 20 characters (22 if you count the upcoming free DLC) compared to Melee's 25 and Brawl's 35, however, somewhat remarkably (with the minor exception of Good Cole and Evil Cole) none of them are clones. It's clear that a lot of time and effort went into making every single character feel extremely distinct, with no two so much as sharing a basic punch attack. Though technically fewer options, the variety found between contenders matches, if not overtakes that of SSB.

Fighting is controlled exclusively by single-button attacks, with each primary button (such as the triangle on PS3 or B on GameCube) governing a certain category of movesets. The few combos that exist are organic, never requiring the memorization of large input strings, meaning the power of an attack is never tied to the complexity of executing it.

While every attack is themed after each character and their home game, PlayStation All-Stars manages to make its move sets both more varied and "appropriate" than SSB. First, there is no standard attack button (A in SSB), opening up that input for a full range of additional specials (input, up+input, down+input, left/right+input, air+input). Yes, it's common that the square button often governs the fastest, lowest impact moves, but it varies in execution between characters. PSA also doesn't assign a duplicate button to jumping, opening up its characters to yet another special moveset for a total of three, compared to SSB's one. This leads to a variety present not only in the roster, but from within the individual characters themselves.

With the exclusion of a standard attack, however, comes the exclusion of the "smash", SSB's timing dependant power-hit. That sense of timing and execution exists with some character's various special attacks, but nothing so uniform and ubiquitous.

Attacks in BR also feel more fitting to each character, giving a larger sense of controlling the fighter in his or her home game than SSB achieved. Mario, for example, had four special attacks thematic to him, but not representative of how he actually fought (with the exception of his fireball attack). Mario generally jumped on his opponents, however, in SSB, jumping on an opponent doesn't cause harm. Compared to Kratos, whose moves not only match his strategy in God of War, but often the exact inputs, Mario isn't quite as true to Mario. It's an effect that isn't exact science, and says nothing of balance or how well or poorly a character plays, however is worth noting to those playing as series fans.

Victory is the single largest difference between Super Smash Brothers and PlayStation All-Stars. While in SSB, hits cause damage that, in turn, governs gravity's affect on the damaged character, PSA has completely removed the ideas of damage, changing gravity, or maneuvering for ring-outs. PSA characters fight to generate "All-Star Points" that charge a super move meter. The meter can be filled up to three times before a super move is executed, and depending on its charge, will create one of three supers of varying strength. Any connection between a super and opponent causes instant death, and that process is the sole method by which to score.

The super methodology creates balance issues for PSA that SSB doesn't have to manage, namely the killing/scoring power of each move per character. Like standard attacks, supers are extremely varied in both the way they're executed and the injury they're able to cause. Because these moves are the only way to score, however, their balance, separate from the regular move-sets, becomes the most important factor in determining a match's outcome. Some max-level supers are inarguably better than others, though the only way to execute them is to have first performed well enough in battle to charge the meter.

Unlike SSB, PSA's victory condition moves the gameplay from knocking people off-stage to performing amidst a constant state of aggression. Tactically, map position no longer dictates strategy beyond attack range, and there is no consequence beyond another person's AP charging for being repeated struck. While in SSB, the effect of poor play is permanent until killed, dodging a super in PSA completely invalidates all of the attacks you absorbed in allowing it to be built.