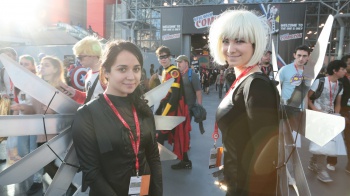 The Bad: Social Media Manipulation
Facebook and Twitter are very personal things. Sure, you open yourself up to the world, but you do it because you want to share your thoughts, express yourself, or get the word out about something. It's very common to find Share and Like buttons on every page of the internet, but very rarely do you see something so brazen as NYCC's social media manipulation this year. As part of registering your badge, you could link up your Facebook and Twitter accounts. I'm not huge on social media in general, but Janelle Bonanno lives for that stuff, so she didn't think twice about linking her accounts. Much to her dismay, she checked her Facebook on Thursday and discovered this:

NYCC had taken full advantage of the integration, and started posting on Janelle's behalf. Others experienced the same thing on Twitter, much outrage was had, and shortly thereafter NYCC stopped the practice. Suffice to say, it is never okay to post on people's personal pages without their permission. Sure, it could be argued that permission was in the fine print, and they should have read more carefully, or just avoided linking up entirely, but the fact remains that this is not an acceptable approach to getting your message out there. I promised earlier that I wouldn't harp on this, so I'll just leave it at this: If you want to spread your message through social media, make it a compelling and shareable enough message that people will want to post it themselves.

The Good: Art(ists)
NYCC is something like the real-life counterpart to DeviantArt. Independent artists from all around gather there to showcase their work, try to get their name out there, and just share their love of creative endeavors with the masses. From writers to painters to CAD-designers, everybody at NYCC this year seemed to have something amazing to show off, sell, or just give away. There were painters working around the clock on the show floor, creating beautiful works on giant canvases taller than they were. One CAD designer hunkered down for four days at his booth showcasing V.e.r.a.1, an adorable cybernetic fox mounted with sensor arrays, which turned out to be one of my favorite items at the show. He was worried he might not sell anything. He sold out on Saturday. No, it's not a functional autonomous rover, but the descriptions on the website and the backstory just go to show how much care went into its creation. Then there was Writopia, situated right next to The Escapist booth, where they spent the entire weekend recruiting people to take part in the creative process, and create their own super hero. Passion for the creative process was everywhere, and it was hard not to be excited with them.

The Bad: Creepers
As a male in the games industry, I have limited experience with the tribulations that women in nerd culture suffer. No, it's not only found within the nerd culture, but I like to think that we nerds are collectively more enlightened than other subcultures, and so I tend to hold us to a higher standard. This year at NYCC, there was a well-publicized report of harassment from a particular video crew doing "interviews" at the con. From everything I've read, nothing was ever done about this despite the fact, as she points out in her post, that many teenage girls attend this con and may well have been subjected to similar treatment. I wasn't there and I don't know the full story, so I'm admittedly spreading hearsay here, but if the report is even remotely true and no action was taken, that's a serious black mark against NYCC 2013. I realize that this kind of thing happens at practically every con in some form or fashion, but that doesn't excuse it being permitted to continue after being reported.