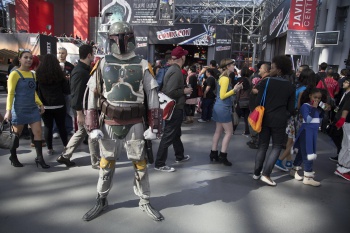 The Good: Equality
While I've been with the company for almost 10 years, but I've been writing for less than two years, so 2013 was my first run on the convention circuit. I went to DICE, QuakeCon, E3, and PAX thanks to my press credentials, and I got accustomed to special treatment for anybody holding a press badge. Then I went to NYCC. If you're a consumer, rather than press, I expect you'll be pleased to know that this is the only convention I've been to where press gets zero special treatment. NYCC treats everyone equally. For consumers and professionals alike, if you want to see a panel or check out an exhibitor booth, you have to wait in line like everyone else. Sure, it's a little frustrating when you're trying to write about the show, and the only way to get into the Walking Dead panel is to get in line several hours early, but I think the fact that NYCC puts everybody on equal footing is something to be commended. NYCC doesn't need the promotion and visibility that comes with press coverage - there are already more than 100,000 people attending and, based on my experience, they couldn't possibly squeeze more in there. This makes it the most consumer-friendly event I can think of. E3 is, at least in theory, an industry-only event. PAX exhibitors frequently offer immediate access to anybody with a press badge. NYCC stands alone as the convention for consumers, where the press gets to wait in line with every other con-goer.

The Bad: Crowds and Lines
This almost goes without saying, but I'll say it anyways: NYCC needs to restrict their attendance or get a bigger venue. Since I don't know that a bigger venue even exists, I expect the former option is the only real way to go. If you've been to other conventions, you are probably fairly used to crowds, even throngs of people. The crowds at NYCC trump anything I've seen. It's a massive crush of bodies in a very confined space, and it quickly becomes very difficult to navigate. When it takes five minutes to walk a hundred feet, it's time to reconsider the setup. I have to assume that the attendance numbers are in line with fire safety laws, but I can't even imagine - heaven forbid - if something were to require evacuation of the Javits Center. With this many people in one space, naturally comes lines. Lines for the bathroom, lines for coffee, lines for food, and, of course, lines for panels.

For Example: I showed up an hour early for the Walking Dead panel. "Where is the queue for Walking Dead?," I asked the staffer at the door. "They've been turning people away for hours now. People have been lining up since 9 o'clock this morning," he responded politely. I learned later that many of these people were camping out in the panel room, watching all of the panels of the day while waiting for their panel of choice. I understand that you can't always fit everybody that wants to see a panel into the room, but to have people waiting for nine hours seems a little absurd to me. Maybe there's a way to expand into the nearby buildings for next year, or simply restrict the number of badges. I've developed a tolerance for heavy crowds this year, to be sure, but NYCC was a whole different beast.

Ultimately, NYCC 2013 was a great experience. Not only for me, but for practically everybody I talked to. There's room for improvement, sure, but I won't say that I didn't have a good time. Even when I missed the panel I most wanted to see, I spent the hour wandering instead and had a stellar experience the entire time. If you're a part of the nerd culture, and really want to immerse yourself in it for a weekend, get your tickets to NYCC 2014 early, because they're bound to sell out fast. Not to mention that it's a great excuse to spend a couple of days in New York City. Who doesn't <3 NY?