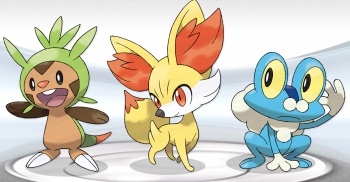 So you've never played Pokémon before. Or you've played, but its been years, and now you want to get back in. Good! Now is the best time, because Pokémon X and Y are both great and beginner friendly. They've got an incredible array of new features and they're friendlier than ever for newbies. If you're not convinced, you should really read our review.

Veteran or otherwise, you might stress about what starter to pick. Chespin, the grass type, Fennekin, the fire type, or Froakie, the water type, are all very similar in how you'll use them throughout the game. The short of choosing your starter is this: They're all strong choices, all useful, and you'll be happy to use them throughout the game. Pick whichever you like the most. There' some cleverness in picking Fennekin right off, the fire attacks will ruin the day of all the Bug and Grass types in the early zones, but in the long run that won't really matter. Online trading is fantastically easy in X and Y, far easier than it has ever been. Kind people are already flooding the wonder trade system with bred copies of the starters, so shelve any worries about ever getting your second favorite - odds are you'll be able to trade off for it in no time. So now that you've chosen your Pokémon, what do all those numbers and letters mean?

The game plays out like this: You'll wander around the world in a gently guided, but open, tour. You'll see fancy new things and talk to everyone you meet. I mean that last part. Talk to everyone. The people of the Pokémon world are incredibly friendly - they'll give you a vast variety of useful items just for chatting with them. Other easy tips might not be immediately apparent to you, or the game doesn't do so well explaining them, so here they are. You'll make most of your money from battling other trainers, but occasionally you'll get valuable items worth selling. Generally, you want to catch every new Pokémon you see. Your party gets an experience boost when you capture new things, and that alone makes it worth it, but having a variety of things to power level later will make your life easy when you decide you need a Dark Type, and you've already picked one up hours of gameplay ago.

All Pokémon have a type - yes, even "Normal" counts as a type - that defines, at heart, their defenses against attacks categorized with the same system of types. Some Pokémon have two types, which gives them a hybrid of the defenses of both kinds. Additionally, all the moves your Pokémon have are typed - that's what helps determine how much damage they do based on the opponent's type. This information is handy on the UI, but a type chart - like the excellent one made by Serebii - will go a long way if it's close-at-hand during the game. Further, there's a key piece of Pokéstrategy in what experienced players call the "Same Type Attack Bonus." Pokémon of the same type as the attack they're using are more effective with that attack. So, for example, a Water-type Squirtle using the Water-type move Bubble, will do more damage than a Normal-type monster using the same move. Your Pokémon can only have four moves each, and it's a good guideline to get a mix of at least two types of moves, if not three, and be sure to have a useful buff move for yourself and debuff move for your enemies - those are ones that raise or lower yours or your enemy's stats.

Beyond each Pokémon move having a type, they all have a kind based on what they do: Physical, Special, or Status. The kinds of moves key off of your Pokémon's stats - Health, Attack, Defense, Special Attack, Special Defense, and Speed. Attack and Defense affect how well the monster does with and against Physical attacks, while the Special versions of those same stats. Speed, meanwhile, determines which of the Pokémon on the field uses their move first. In the beginning, typing, stats, and move types aren't that important - other than making sure you don't deploy your starter against its opposites - but as the game enters the 10+ hour range you'll often want to retain and train a diverse range of types to the highest levels you can.