The Escapist Award Nominees for Best Shooter of 2013 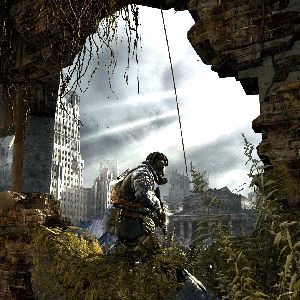 Justin says: Love it or hate it, shooters have largely become the marquee genre for video gaming. It's where the vast majority of multi-million dollar budgets, big developers, and the greater bulk of attention are being directed to. Everyone is vying for that "Killer App", especially as we transition into the next console cycle as chasing after being the next Halo or Call of Duty has quite the lucrative appeal. While this does lead to a certain degree of stagnation, it also requires that to be truly noticeable in the space you need to fight your way to the top by playing to your title's strengths. Some of these nominations pulled at our competitive nature, while others were looking to immerse us in a new world, but these are our picks for best shooters of 2013.

Any discussion of shooters just can't ignore the now yearly release of Call of Duty. This time around we're back in the hands of Infinity Ward for Call of Duty: Ghosts. The singleplayer campaign felt a bit paint-by-numbers for the series, with Riley the dog stealing the show for lack of much else of interest going on. We'd be kidding ourselves to say that singleplayer is as much of a main focus for this franchise anymore, though, and Call of Duty: Ghosts goes for the kitchen-sink approach by throwing a ton of improvements and new modes into the multiplayer experience. If you're a Call of Duty fan, it's not a hard sell.

Call of Duty's partner in crime so-to-speak has been the Battlefield series. Whereas Call of Duty's focus has narrowed and refined to fast paced shooting with tightly constructed maps to funnel the action, Battlefield 4 has big open maps that emphasize working together with your team, destructible environments and using the game's vehicles. This freedom leads to some of the most amazing moments in any shooter, an aspect that EA picked up on this year tagging the game with the marketing "Only in Battlefield. The game has been plagued with some launch issues, but once those are smoothed out it still offers the best big map shooter on the market.
In many ways Call of Duty and Battlefield have become synonymous with the Xbox and PC respectively, but Killzone has been Sony's response on the PlayStation. Killzone: Shadow Fall is Guerilla Games' latest entry in the franchise, and it's our first taste of a shooter developed exclusively for a next-gen console, the PS4. Picking up 30 years after the events of the previous game, Shadow Fall throws you back in the mix against everyone's favorite space Nazi antagonist's the Helghast. Shadow Fall is rife with graphics fueled by new, enhanced system power and makes use of lots of the bells and whistles the new console and controller offer, like the DualShock 4 touchpad. It will be a taste of many things to come.

Setting themselves apart from the previous three, Metro: Last Light and BioShock: Infinite instead focus on more personal affairs. From keeping track of your gasmask filters to hoarding your precious ammo by avoiding fights when possible, Metro: Last Light lets no element go to waste in telling its tale of folks living in the Russian underground railways after the surface became a nuclear wasteland. It's a gritty and dirty world, where folks are trying to merely irk out any sort of a respectable existence, all while dealing with the various factions warring for resources and the abominations that nuclear fallout has created. The game's optional Ranger mode takes this to another level, reducing the amount of resources in the game while also removing the HUD and cross hairs. This turns Metro: Last Light into a deeply immersive experience where having a sense of how much ammunition you have left is just as important as being able to make each shot count.

On the same token, BioShock: Infinte reaches for new heights in visual storytelling, corny pun yes, but still true. At its core Infinite puts a world on display and uses this setting that's dripping in details to layer its storytelling upon. Columbia and the characters within are as breathtaking and charming as they are rotten once the veil is pulled aside. It's a richly crafted world that, like BioShock's Rapture before it, elevates setting as a quintessential element in the formula. Elizabeth is ultimately the star of the show, and brilliant performance by Courtnee Draper and meticulous work by Irrational Games breathes life into the character that is not only centrally important to the game's narrative, but also dodges many of the video game companion pitfalls. She's capable and helpful rather than a burden. If anything, BioShock: Infinte biggest fault is that it leaves you wanting to see more.

Which game will win The Escapist Award for Best Shooter of 2013? Check back next week to find out!

Continue to see the nominees for Best Platformer of 2013.