The Escapist Award Nominees for Best Platformer of 2013 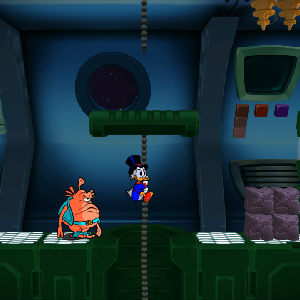 Josh says: Platformers have come a long way since their heyday during the reign of the NES. One of the most prevalent genres in gaming, platforming has moments of unparalleled frustration with occasional moments of unabashedly joyful celebration. Although the former was the more common emotion associated with classics like Ghouls 'n Ghosts, when you did finally power your way through that nigh-impossible level, there was really nothing like that feeling of triumph.

Super Mario 3D World is the latest entry in what is arguably the most recognizable name in platforming, and perhaps in gaming as a whole. 3D World offers bright and colorful environments, and traditional Mario gameplay, which has always stood as a standard of excellence in the genre.

Unlike the evolution of Mario from 2D to 3D over the years, DuckTales: Remastered contents itself with being a straight reskinning of a 2D classic. DuckTales doesn't try to do anything new, instead focusing on the already-winning classic platforming gameplay formula, while sporting updated graphics.

Platforming in 2013 was heavily driven by recognizable franchises, not the least of which is Rayman Legends. Legends brings an impressive local multiplayer experience and a plethora of levels to the table, including 40 remastered levels from the previous entry, Rayman Origins.

Not everything in the genre was about the classics, and Tearaway shows that you can still innovate. Tearaway immerses you in its paper cutout world with real-world interaction, where you skin characters in game with a picture you take with the Vita's camera, or reach into the world itself with the touchscreens, interacting directly with its inhabitants.

Finally, we have another example of truly innovative mechanics and gameplay in The Bridge. Not all platformers are about physical dexterity. Sometimes they can require mental acuity to solve puzzles by manipulating the world around you. The Bridge is flush with dizzying environments based on the works of M.C. Escher, which lend themselves to some genuinely mind-boggling platforming.

Which game will win The Escapist Award for Best Platformer of 2013? Check back next week to find out!

Continue to see the nominees for Best RPG of 2013.