The Escapist Award Nominees for Best RPG of 2013 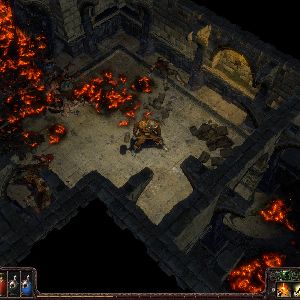 Justin says: In some ways, not having the 800 lb. gorilla that is the latest entry in massively popular franchises like The Elder Scrolls or Mass Effect has led to a slightly more eclectic list of nominations this year. We're drawing from every strata of where RPG mechanics have reared their little statistically driven heads: free-to-play, hand-held, mmo, you name it. It's a testament to how deep this genre can truly be, and we were happy to get lost in the experience of each and every one. These are our picks for best RPGs of 2013.

Ok, so maybe there is one major franchise on the list this year. Exploding onto the scene 15 years back, Pokemon has become one of the biggest names in gaming. Despite the extraneous games, shows and everything else connected to the Pokemon universe, the core games have continually iterated on a nearly rock solid RPG based around capturing fantastical creatures, leveling them up and pitting them in battles against each other. The most recognizable improvement with Pokemon X & Y is the switch to 3D, Pokemon finally having hit the limit of what they could do with sprites shaking about on screen. The new battles are now visual feasts to enjoy, but ultimately it's the crunchy center, not the shiny candy coat, that sells the game. With even more Pokemon and greater variety in the starting areas, Pokemon X & Y still retains the simple joy of lovingly building your perfect team.

It's not hard to see what niche Path of Exile is carving for itself. After the somewhat tepid response to Diablo 3, a lot of action RPG fans were left wanting for a game more in the vein of Diablo 2. Path of Exile offers up plenty of delving into dank caverns and unsettling dungeons, but it's the mechanics and principles behind them that really drive the game and keep everyone coming back for more. Perhaps the most intriguing element is the elimination of traditional currency from the game. Instead, you're forced to barter with players and NPCs. With lots of incentive to find the perfect randomly generated treasure, level up your skill gems and partake in the various leagues and modes of play available, Path of Exile offers a lot of play for very little price - free - and its microtransactions are thus far limited to visual flares or low impact convenience.

While it hasn't reach the levels of a few of the other genre's juggernauts, the Fire Emblem series has made a name for itself with its unique brand of party mechanics, most notably the perma-death of your party members. However, due to slipping sales for the franchise Fire Emblem: Awakening was slated to be its final outing if it didn't reach the necessary numbers. Luckily, the developers at Intelligent Systems knocked it out of the park. A solid story filled with a fun ensemble cast of characters is coupled with new or improved upon RPG mechanics from the game's roots. Though for less masochistic fans, there are a suite of difficulty options, including a mode that revives characters that fall in battle. Fire Emblem: Awakening is one of those rare handheld title that you'll play curled up on the couch despite more powerful gaming systems being on hand. If you don't already own a 3DS it's worth it to buy one for Fire Emblem: Awakening.

Despite what a few starry-eyed optimists might think, it's doubtful that Kickstarter will ever completely supplant tradition videogame development. Where it has made tremendous strides, however, is revitalizing genres and settings with niche appeal, which might otherwise not be deemed profitable enough by big box publishers. Making an isometric RPG based on the Shadowrun setting was what developers Harebrained Schemes had in mind, and fans supported that vision to the tune of nearly $2 million in crowd funding. Shadowrun: Returns faithfully adapts the genre-mashing setting, where street samurai, dragon presidents and cyber-zombies are the norm. The game is a little rough around the edges, but sharp writing and seeing a proper return to a beloved franchise that hasn't seen a decent release in years is still worth entry. There's even a new patch and campaign releasing soon that will eliminate some of the initial issues. If you have fond memories of 90s isometric RPGs, or enjoy cyberpunk settings, give Shadowrun: Returns a look.

Second chances are rare, especially in the gaming space where first impressions are paramount. To say that Final Fantasy 14's initial release was a flop might be overselling it. Former Square Enix CEO Yoichi Wada said that it had "greatly damaged" the Final Fantasy brand. To its credit though, Square Enix apologized to fans while promising that improvement would be made to both the game and the team. Three years later, we have an aptly named Final Fantasy XIV: A Realm Reborn. A Realm Reborn looked to address all the grievances leveled at the original outing, and even expand on its predecessor with a new engine and story. There are even new world events to enjoy and partake in, letting players spontaneously work together to combat larger threats and events in the field. What once was an utter disappointment became a game embellished with detail and charm.

Which game will win The Escapist Award for Best RPG of 2013? Check back next week to find out!

Continue to see the nominees for Best Strategy Game of 2013.