The Escapist Award Nominees for Best Adventure Game of 2013 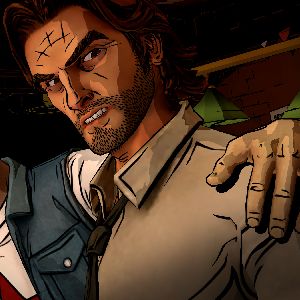 Greg says: The distinction between adventure games and its "action" brethren is actually quite profound. Adventure games trace their lineage back to the early days of computer games with text-based adventures by Infocom and Sierra's King's Quest. 2013 has seen a bit of a resurgence in the format's popularity, with independent developers jumping on the success of Telltale's The Walking Dead to push the limits of narrative and character development possible in a video game.

Telltale followed on last year's Game of the Year with another property licensed from a comic book line called Fables. A Wolf Among Us follows Bigby Wolf, the Big Bad Wolf from the fairy tales, as he protects other storybook characters exiled from their Homeland in a 1980s New York City. The first episode proved you can adapt a complex world full of backstory without needing to hammer players with exposition, and providing an excellent opening to an ongoing mystery the player must solve. Wolf Among Us is a rare combination of atmosphere, story, and aesthetics that is just jaw-droppingly brilliant.

The Stanley Parable is a remake of the original mod using Valve's Source engine and features a first-person control of the main character, Stanley. The game is short, but it excellently skewers both the limitations and uses of branching, choice-based narratives used in computer games since the old days. The Stanley Parable is one of those games that will be studied by game designers for years to come.

Many may object to Phoenix Wright: Dual Destinies - aah, who am I kidding? That was just a needless way to get the word "object" in a sentence about Phoenix Wright. The courtroom drama game from Capcom is the first in the series on the 3DS, and it kept all of the aspects intact while adding more features and spiffy updated graphics. The story was also stellar, and introducing Athena Cykes, an 18-year-old prodigy fresh out of law school was an interesting twist.

The world of Papers, Please is dark and grim, and you have to navigate it with care. As a customs agent on the border of a communist dictatorship, you must decide whether to let people through or reject their requests. The game constantly bombards you with micro-narratives in the form of all the people seeking entry into Arztotska. Every one of them has a story, and deciding whether or not to help a few rebels, or a woman who wanted to meet her grandson, across the border is rough - especially when you had to weigh their narratives against your own family's needs. Papers, Please is very original in both making ID-checking mechanics fun and creating an engaging story.

Gone Home is an interactive story from the Fullbright Company which allows the player to investigate objects in the main character's parents' empty house. The player must figure out the narrative from reading notes and examining objects, and only then does the full story come to light. It's hard to call Gone Home a true "game" but it is a breakthrough in interactive storytelling nonetheless.

Which game will win The Escapist Award for Best Adventure Game of 2013? Check back next week to find out!

Continue to see the nominees for Best Horror Game of 2013.