The Escapist Award Nominees for Best Horror Game of 2013 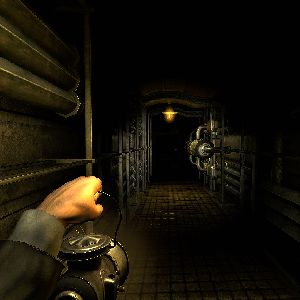 Jim says: As a mod, Slender terrified the pants off multitudes of hardened gamers, and found fame in the hallowed halls of screaming YouTube Let's Play videos. The full-fledged experience, Slender: The Arrival adds more story and environments to the original haunted house funfair attraction, tying it further into the Slender Man mythos and paying particular homage to the famed "Marbel Hornets" series of videos. Some may find its creeping terror and loud noises cheap, but there are plenty who enjoy their horror this way, and The Arrival gives them exactly what they're looking for. Definitely worth a punt if you want to turn yourself into a gibbering wreck.

The Chinese Room's take on the Amnesia series was controversial, but A Machine for Pigs remains a nonetheless interesting little game. More story-driven than The Dark Descent, there's no mistaking the fingerprints of a studio most famous for giving us Dear Esther. Much of the experience is given over to exploration, with only the very rare appearance of a monster getting in the way of the narrative. It's a fascinating narrative, however, full of evocative - and disturbing - imagery that draws the player into a world of misanthropy and the surgical detachment of a repressed Victorian era. Those looking for a repeat of the last Amnesia game will be disappointed, but if you're after a truly morbid story, this may sort you out perfectly. For indeed, the world is a machine. A machine for pigs.

Zombie games are so common now that rarely can you talk about zombie games without first noting how common they are. State of Decay is one more zombie game on the pile, but it manages to stand out with its emphasis on survival and resource management. Fighting the undead takes second billing next to the need to scavenge for supplies and maintain a healthy base camp of survivors. Characters need interacting with to keep their morale up, HQ camps can be upgraded with facilities that award a number of benefits, and individual characters are leveled to attain their own unique set of skills. Also, once a character dies - it's dead! Packed full of interesting ideas that are simplified just enough to stop everything being too complicated, State of Decay is a fantastic little horror sim for those who want to think as much as they want to smash.

That's it! Our nominations for The Escapist Awards 2013. Feel free to sound off in the comments below or on Facebook as to how good or how terrible you think these nominations are!