The Nominees for the Escapist Award for Best Shooter of 2013 are:

Justin says: In my opinion, no shooter this year so closely mirrored setting and gameplay as Metro: Last Light, and it proved that the post-apocalypse setting still had some life left in it. Set in the metro underground beneath Moscow after the population escaped there from a nuclear bombing, Metro: Last Light followed up and improved upon nearly every aspect of the series' first outing with Metro: 2033. It's a game steeped in a richly detailed atmosphere, with the packed subway stations having a life and lived in feel that's seldom seen in games. You start to feel for its inhabitants all trying to irk out a meager existence while facing the threat of rival factions vying for resources and the various mutated abominations the fallout has spawned. The game is perhaps at its best and most immersive when enabling its harder difficulty modes, a reduction of resources like ammunition and removal of the HUD and crosshairs puts the whole experience into a different light. Stealth becomes a major facet of gameplay as resource conservation becomes increasingly important. These quiet tense moments are in their own way more enjoyable than the bombastic rollercoasters most shooters have gravitated towards. 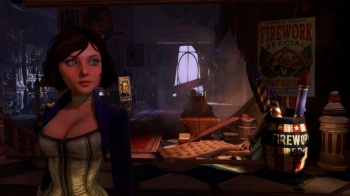 Janelle says: Few games manage to get everything right. BioShock Infinite is the game that did. In a time where it can seem like we are doomed to constantly sacrifice story for game play or intuitive UI for immersion, BioShock Infinite showed every one that, yes, we can have it all. With your first small choice, what starts off like an RPG immediately explodes into an edge-of-your-seat first person shooter that refuses to leave story, action and an endless sense of discovery behind.

From the moment you find yourself ripped from the ground through a rocket blasting lighthouse and thrust into the beautiful skies of Colombia, you are immersed in a beautifully designed experience, each of its many facets expertly polished. Floating through the skies, alone and confused, you discover a world blanketed in nostalgic American themes where a dream inspired by roads paved with gold has been perverted into a nightmare. As Booker Dewitt, you find "the girl" as you slowly uncover the secrets hidden within the underbelly of this seemingly prosperous utopia protected by the frightening Songbird and mechanized defense units created in the image of the United States' founding heroes. Yet, this is not a journey built for the protagonist alone, but for the player too. As you Murder of Crows your way to redemption, you will be personally confronted by an alternate realty where isolationist-bred extremism shaped an American nationalist society. Bioshock dares you to question your morals and beliefs with controversial themes we are currently struggling with in our modern world.

Any game that manages to do it all deserved to be recognized as one of the best in any line-up of this year's past games. BioShock Infinite is as perfect as games currently get and sets the bar for what all games should strive to achieve.