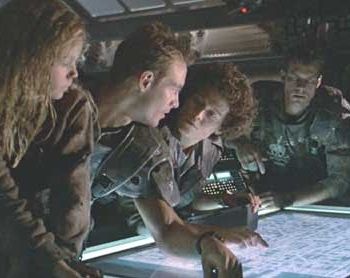 In 1979, Ridley Scott's Alien was released. The film was a pioneering work in the sci-fi thriller genre, and to this day it still elicits screams of terror. While the film was terrifying in many ways, the most crucial factor to its ability to continue to scare its audience was the use of tension. The alien was an invisible constant that kept the members of Nostromo guessing as to where death was hiding. As they navigated their way through the dark corners of the ship you knew that something might jump out and end them. No characters seemed safe, and the director wasn't concerned with making the alien a visible threat. The xenomorph was hunting them like a snake hunts mice at feeding time in its enclosure. Alien set the stage for a series that could have been a beautiful hard sci-fi franchise. The possibilities were there for Ridley Scott's masterpiece to spawn a truly terrifying film series.

Aliens was released in 1986 from a director that had just gotten quite a bit of attention from a little film called Terminator in 1984. He must have been an obvious choice to direct the sequel, making it much less of a sci-fi thriller and more of an action movie. Not that all action movies are bad, there are always the likes of The Matrix (not the sequels) to engage you with bullet time and kung fu sequences. The problem with James Cameron taking a turn on Aliens is that the film disregarded character development, just having very apt nicknames for the Marines, and story for action and more action. This did away with all of that pesky dialogue that would drive the characters' motivations. The Marines are Marines and that's all you really need to know about them. You're given two-dimensional characters with the depth of a puddle. One of the two truly developed characters, Ellen Ripley, develops her maternal side, but that's about it. Her character isn't developed beyond the fact that she is truly a female adult.

The true terror of the first Alien came in the form of a lone xenomorph. There was one and it was making its way through their ship picking off the crew members one by one. You never knew who or when it was going to strike, and it spent most of its time lurking in the shadows. This, mixed with the darkness of the bowels of the ship, made Alien a true horror film. With Aliens the xenomorphs were everywhere. The space marines were inundated with them, giving away the horror element in favor of a pure action film. With that one change the Alien series was permanently altered, the xenomorph had become a celebrity in itself and Aliens was there to take advantage of that situation. Everyone thinks of Ellen Ripley or Bishop as the reason people went to that film, but in reality, they went to watch aliens get blown to bits. Not that there's anything wrong with aliens getting blown to bits, but when it takes away the potential that the Alien series had and funnels that towards a mind-numbing action film, you have to look at what could have been if they had stuck to a sci-fi premise. They didn't need to make the alien as prevalent as they did. They could have had continued to have the alien lurking, as it now has a much larger food supply. With this, the character development would have been organic, as the space marines would have had quite a bit of downtime to actually engage in conversation, rather than just yell at each other amidst a fire fight.

Alien started a new wave of filmmaking, the dark and gritty mind of Ridley Scott had been released and a mere two years later we got to see more of that with Blade Runner. James Cameron went on to take advantage of the action genre and made movies that you didn't really need to talk about after watching. You could leave the theater and, after talking about the action scenes, there was no real dialogue to be had about the story, because that was not a priority. The story took a back seat to the visual experience, which ultimately was James Cameron's forte, and in doing so, helped to bring down the intelligence of the movie-going public. James Cameron wasn't responsible for this push towards film without substance but he definitely took advantage of the result. Ridley Scott, on the other hand, has changed filmmaking with Alien and Blade Runner. He ushered in an age in which the latest Batman movies could exist. He brought with him an eye for the darkness and, in exploring that darkness, we terrify ourselves.