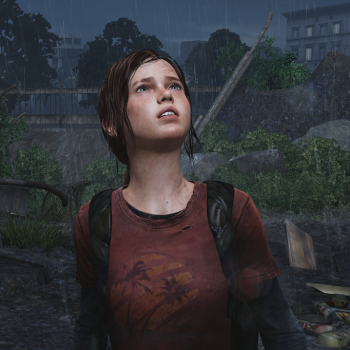 Josh Vanderwall, Managing Editor of The Escapist: There have been a lot of words written about Naughty Dog's PS3-exclusive The Last of Us since its release last June. Jim Sterling talked about it recently, calling it "A beautiful and engrossing story of redemption... The Last of Us is touching, disgusting, and often times scary." It naturally won The Escapist Award for Best Action-Adventure, where we said "The Last of Us sets the player up to not only play the game, but genuinely experience the drama as the adventure unfolds." Naughty Dog's game defeated the fan-favorite Papers, Please in The Escapist's Reader's Choice Game of the Year bracket, Even Yahtzee found something to appreciate , calling the story "well presented," which is actually quite the bit of praise coming from The Escapist's most curmudgeonly personality.

If you haven't puzzled it out yet, we really like The Last of Us.

With expertly-crafted characters, with their humanity on display at all times, The Last of Us told a heartbreaking story from the tragic introduction to the controversial end. Whichever side of the debate you find yourself on, it's hard to argue that the ending of The Last of Us was anything less than poetic, even if it's poetic in the saddest kind of way. It asks - and answers - uncomfortable questions. "What would you do?" It could be argued that Joel's actions in the closing scenes show more character development than some other games' protagonists get throughout their story. Then, there was the musical alternate ending, which is worthy of its own award.

It's not the gameplay so much that made us pick The Last of Us as Game of the Year 2013. It's the wholeness of the experience. It's the fact that, despite playing dozens of games this year, the characters, the story, and the interactions in The Last of Us persist through the noise. I played Ryse: Son of Rome less than two months ago, and yet The Last of Us is what I remember from the year, despite playing through it back in June. So, regardless of how played out Zombies may be, or how passé post-apocalyptic settings are these days, The Last of Us does more than just end the world in a perpetual tide of ravenous undead. It offers an inimitable glimpse at the lives and motivations of survivors, of humans, of genuine people that you can truly understand and, with that, associate yourself with as you play.

You don't have to take our word for it, The Escapist community also finally chose The Last of Us for the Reader's Choice Game of the Year in our bracket tournament. It's rare for both critics and audience to match up so closely - look at the discrepancy between Metacritic user scores and critics - but it's a testament to the design of The Last of Us for both the press and the audience to be so aligned in their praise. Read more about the results of the Reader's Choice bracket here.

The Escapist is proud to present our Game of the Year 2013 Award to The Last of Us! Congratulations to game directors Bruce Straley, Neil Druckmann, designer Jacob Minkoff, and the whole team at Naughty Dog Studios for delivering an excellent game experience. KUDOS!