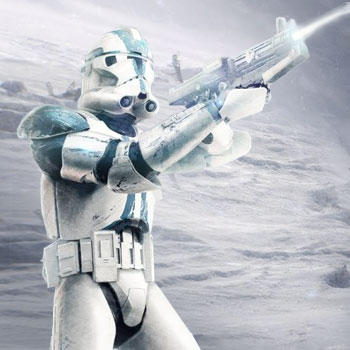 Like many a fan of the now-classic Battlefront experience, I was undeniably excited at the glimpse we collectively got at E3 2013 of the future of the franchise. With the first two iterations so close together - they were only a year or so apart - waiting 10 years for another sequel has been excruciating. Not that I would have been happy with the annualized sequel treatment, but seeing and hearing practically nothing for a decade is a bit harsh. Once reports started emerging of in-progress Battlefront projects being canceled, I mostly lost hope.

I won't say that the E3 teaser impressed me - it was mostly snow with a dash of lasers - but the execution was a masterstroke. It may not have impressed anybody, in fact, but it didn't disappoint them either, which is ultimately what's important. Will it be like the first two, or will they take it in a new direction? Purists would certainly have hated to see any major change, while those who liked the concept, but not the original execution, would have hated to see the newest entry in the series stick to the original formula.

In one fell swoop, not only did DICE manage to rekindle a fading interest in playing another Battlefront, but it managed to avoid scaring off any section of its longstanding fanbase. If you look at something like The Bureau: XCOM Declassified and its catastrophic gameplay reveal, it is fairly obvious that you can drive away your most enthusiastic fans if you show them something too far off from what they were expecting.

If you're unfamiliar, The Bureau is a squad-based shooter in the XCOM universe. It puts you in the boots of a squad leader, requiring you to direct your team to take cover, focus fire, use special abilities, etc. The problem was that the original reveal at E3 2010 showed some kind of solo horror experience, which is counter to the very fabric of the franchise. 2K took some heavy criticism for diverging from the formula so drastically. Why slap the XCOM name on something that was distinctly not XCOM? Fortunately, 2K was receptive to the feedback, and by release in 2013, the game had transformed into its current state, as a tactical squad-based shooter. Despite the 180 with The Bureau, and ultimately it demonstrating very fun gameplay (albeit interspersed with very not-fun meanderings around the base) it was not very well received.

I'm sure I speak for more than just myself when I say that I do not want to see that with Battlefront. Whether it continues with the classic gameplay or mixes things up a bit, I just hope it sticks on the first try. I've loved the franchise for entirely to long to see its future shattered by a misstep early in the process. Given the hot water DICE has been in recently with Battlefield 4, I'm sure I'm not alone in my worry for what that could mean for Battlefront. It's too early to make any real judgments, and maybe, just maybe, BF4 will prove to be an invaluable learning experience for the team, allowing Battlefront's multiplayer to shine at launch.


Regardless of what you liked or didn't like about the original Battlefronts, it's hard not to be excited for the reboot. With only the E3 teaser to go by, it's impossible to tell what to expect from it, but I, like many a player out there, can't help but be thrilled by the possibilities.

First impressions, as they say.