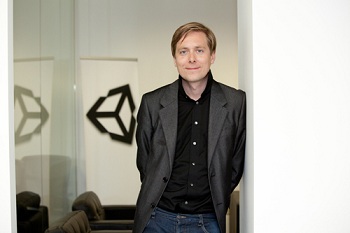 Given the fact that there are over half a million monthly active Unity developers out there, the Unity Cloud cross-promotion platform seems like a logical next step.

At DICE 2014, I had the opportunity to sit down with David Helgason, CEO of Unity, for an animated, albeit brief chat about what Unity's up to now that it has largely democratized cross-platform development. I was surprised to learn what an impressive job Unity has done in fostering development, with Helgason citing a figure of 530,000 active monthly developers. While it's understood that many of those developers are students or hobbyists, the fact remains that if you brought them all together, you'd nearly triple the population of The Escapist's home town of Durham.

Of course, with the good of accessibility, there's also the bad of flooding the market with a multitude of apps and games. It's a challenge to get featured in the App Store, and if you're not featured, you're very difficult to find. Helgason has a plan for this, too, in Unity Cloud. It will act as a marketplace for cross promotion. You advertise another dev's game to your players, and they do the same for you. You might be competitors, but a little cooperation can apparently go a long way.

I was curious about the at-a-glance oddity of somehow benefiting from pushing your players over to a competitor's game, but Helgason was at the ready, citing other, smaller implementations of this sort of exchange. From everything he'd seen, the players that leave your game and don't come back weren't coming back anyways. If you get the credit for pushing them to your competitor, then your competitor returns the favor, giving you one of its outgoing players. Both parties end up ahead a player, with nothing more than the expected churn of players coming and going. It makes sense, even if it seems counterintuitive at first look.

Unity Cloud is just one more addition to a long line of Unity's insightful approach to development. It started with the accessibility of Unity itself and the deliberately low price point for utilizing it; $1,500 or $75/month. Then there's the Asset Store, which allows you to sell snippets of code to other developers, earning a little revenue to keep your project going, and saving millions, even billions of dollars for other companies in the meantime. A successful item on the Asset Store can basically create money by saving precious man-hours of coding work. These millions of dollars are, as Helgason put it, "fabricated out of collaboration."

Whether you've got a popular game with no means of monetization or an easily monetized game with no player base, Unity Cloud expects to be able to offer some real value. Spend some money to get some players, or promote another game to your players to earn a little revenue, or simply trade some promotion with another game that might speak to your fans. If the built-in cross promotion is nearly as effective as Helgason believes it will be, Unity may well continue to fabricate money, not only for itself, but for everyone willing to have faith and participate.