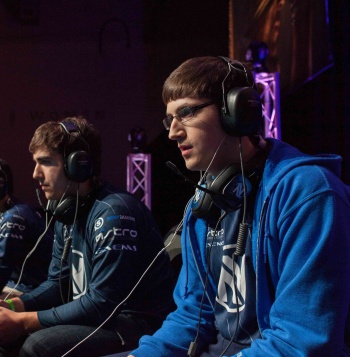 When you think "pro-gamer," you've probably got some preconceptions of who that person is. This could be a negative personification, like some living amalgamation of all the worst elements of Xbox Live, or an aspiration as well. Who hasn't thought on some level of wanting to "get paid to play games"? Experience has shown that pro-gaming is like most competitive scenes, it's really those in the middle between casual and pro that act up. Most real pros are pretty down to earth.

Regardless, these gamers are at the core of the ever-expanding eSports scene. Team Captain Joey "Merk" Deluca from Team EnVyUs, who will be competing in the Major League Gaming Call of Duty U.S. Championships this weekend, said that getting onto the circuit took a lot of time and practice. He is only 20, and has already won prizes of $100,000 in a 2011 event, and $30,000 at a CoD tournament in April of last year. That's nothing compared to the $1 million on the line if Deluca and EnVy place in the top 8 in this weekend's tournament and advance to the Championships later in March. MLG will be streaming the tournament - being held at Full Sail University - all weekend over at MLG.tv starting at Noon on Saturday March 8.

Deluca's competitive drive grew out of playing -- and wanting to beat -- games with his older brother back on the Nintendo 64. A little sibling rivalry apparently goes a long way. This carried through the subsequent console generations until he finally landed on Call of Duty 4 for Xbox 360. Through the introduction of an online friend, he got involved with MLG's online competition site Gamebattles and started playing Call of Duty 4 competitively in 2008.

In his opinion, while there is a degree of natural talent involved, what really sets the best of the best above everyone else is their intelligence and adaptability. Hand-eye coordination will only take you so far, but it's the ability to notice and mentally file away the little details that gives you an advantage and the best opportunity to win. A good sign of this would be being able to simply pick-up a game and have a more innate understanding of it than everybody else.

If that all sounds right up your alley, then he recommends the easiest route to be the same one he took. Sign up for MLG's Gamebattles site and get comfortable competing at that level. Once you're doing well there, you can move on to signing up and traveling to larger tournaments. There, you can really make a name for yourself. 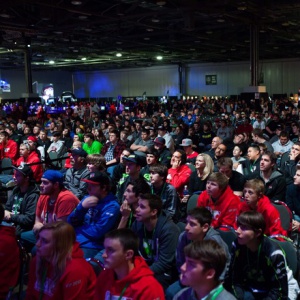 Getting to that level is going to require a lot of practice though. As a tournament gets close, Deluca spends five to eight hours of high intensity playing for five to seven days a week to stay sharp. He said it is important to re-watch your games afterwards and to review and correct mistakes you might not notice in the heat of moment. Practice time can balloon up to eight to 10 hours in the face of particularly challenging or important events. Practice itself mostly consists of scrimmaging against other top teams, and playing in smaller events, but it also requires going over the maps and objectives with your team so you're all on the same page.

Deluca said that, if you're really dedicated, an avenue that assists in this team cohesion is team houses. These are simply homes where the team of gamers all live together, giving them opportunities that other teams don't get, such as better practice sessions and the ability to connect and build chemistry with each other. Teams that have a good relationship outside of the game tend to play at their highest level inside the game, he said.

Once you've wrapped that all together, it's time to execute it. The day of the event begins with good breakfast with the team, and time between matches is spent observing and scouting out the opponents. 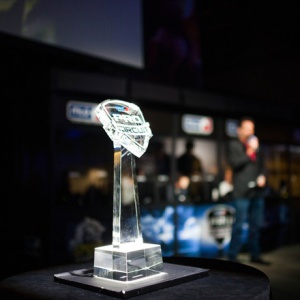 When it is time for a match, a lot of folks will listen to music to psyche themselves up, but Deluca prefers to warm up and focus on the game. He uses the time to think about who he's playing, how that opposing team plays and talk through all the things the team went over in practice. Playing under the cameras can be a daunting experience and quite different from playing from the comfort of home. I've even witnessed gamers bring pillows and other items to replicate their home environment in some small way, but Deluca takes it in stride. While it might take a few games for some people to adjust, he said that once you're up there, your adrenaline never stops pumping.

Communication and a level head will help you and your team stay calm and execute on everything you went through in the countless hours of practice. It's also important to not let emotions get to you. Getting angry or frustrated in one match can easily lead to blowing the next game. Whether all that hard work wins the trophy or not, ultimately for Deluca, it's about making some time for the fans and spectators attending the events.

A lot more goes into being a competitive player than just being good at a particular game. It really starts with having the drive to get better. It's that fuel that makes you willing to invest the time needed. Even if you're able to put in the time, you still need to get connected with the right group of players. Then you practice your brains out, come together as a team, and hope you have what you need to succeed.

On the following page is a transcript of our conversation, just in case you want it directly from Deluca.