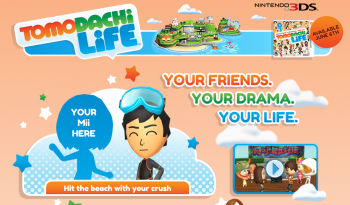 Update: Since writing this article, Nintendo has issued a formal apology for its previous stance on Tomodachi Life and has promised to be more inclusive in future potential titles within the series. I applaud them for their decision to come out and say so, and hope that they stick to their word. The industry and the game community in general can only benefit from Nintendo's inclusivity.

Original editorial: Nintendo has divided the gaming community. Not over just a game, but over a political stance it has chosen to take with its upcoming title-a "life sim" by the name of Tomodachi Life. Their decision was to omit same-sex relationships from the game, excluding a large percentage of the gaming population from properly enjoying it. Nintendo did so on the grounds that it did not want to provide "social commentary" on the issue of same-sex relationships-a so-called "neutral" stance that only serves to favor heteronormative "lifestyles" over "alternative" ones.

To better understand the issue, let's start at the beginning. Tomodachi Life is a game that is for lack of better description, a "life sim" - simulating life, as it were. Players control a host of characters that plod through a simulation of daily life by performing a series of mundane activities, like performing chores, owning a home, going to work, and being in a relationship. Much of these activities are gated - sectioned off - by the game's relationship aspects. You have to get married before you can have children, for example.

These characters, called Miis, are brought into the game by the player through various means (StreetPass being one of them) and are given AIs that allow them to behave autonomously of the player. Tomodachi Life is basically an ant farm in which you get to watch characters act out according to the personalities you provide them and simply hope for the best. Unlike The Sims and its sequels, you don't really get to decide what happens to your characters and the game's sandbox functions aren't anywhere as elaborate as the life-sim from EA Games. Like I said, an ant farm.

So why all the fuss over a game that's little more than a toy?

A campaign titled #Miiquality was started more than a week ago by Tye Marini to bring the issue into the limelight, and to ask-politely-for Nintendo to allow for same-sex relationships to be in the game. Marini kindly suggested that the developers add it in a patch rather than implement it at release, or if that was also impossible, to promise to add it into a sequel or future release of the game. The #Miiquality campaign was not so much a demand as it was a polite request for Nintendo to cater to gay gamers and anyone wanting the option to have same-sex relationships in the game for their characters.

It's sad to say that the original video was taken down from YouTube after it was falsely flagged for spam, which just goes to show how much a few gamers are opposed to the idea of supporting same-sex relationships. The video, which was later re-uploaded to Vimeo, can be seen below.

There are many games out there that owe little to realism, and Tomodachi Life is no exception. In the real world, people do not age overnight, nor do they get married and start families over a period of hours, or even days. But gay people do exist, and removing them from the equation is tantamount to erasure.

Just what is erasure, exactly?
Aside from being a cool band from the '80s, erasure is what happens when someone tells you that your sexuality does not exist and that your lifestyle isn't real. Your love for another man? "You must be confused." "That's not real." It is in a sense denying that homosexuality and pansexuality exist by not holding them in the same esteem as other relationships, while simultaneously contributing to the hidden status of queer people. That's erasure. And erasure contributes to attitudes that lead to violence for people who have no representation or voice in our society.