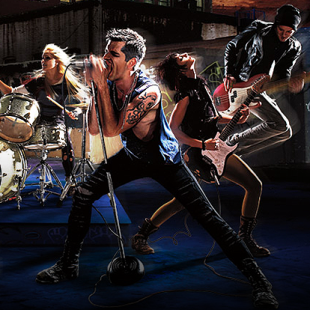 Harmonix recently revealed - after almost five years - that Rock Band 4 will launch on the PlayStation 4 and Xbox One this year. Details on what fans can expect are light, but one feature was made abundantly clear - DLC from the last console generation would be remastered for Rock Band 4: any customers who already purchased that content would get the new editions for free. Not at a discount, and not as part of a season pass - just free.

In the rest of the game industry, this is almost unheard of. Sure, there are some examples of the same game sharing DLC between platforms (Call of Duty and Destiny) but those are usually courtesies to help players transition to a new console generation. Actually sharing the same DLC pack for two different games? That's an entirely different matter.

And to be fair, there's still a lot of grey area surrounding Rock Band 4's DLC announcement. We don't know when exactly this legacy DLC will be released in relation to Rock Band 4. We also don't know which tracks won't get new license agreements, and as such, cannot be included in the finished game. But according to Harmonix's announcement, Rock Band 4 will still support over 2000 songs featured in previous Rock Band games on top of what's included on disc.

Even keeping to DLC tracks, that's almost 1700 songs Harmonix will need to port to the new engine, test, tweak, and digitally repackage. And while Harmonix will certainly be paid by new players, it's free of charge for long-time customers - who by the way, purchased this DLC every week for the better part of a decade.

This is standard practice for Harmonix, who from the beginning made downloadable tracks compatible across platforms. But look anywhere else in the game industry and you'll find the practice is staggeringly rare. Even Nintendo - one of the few publishers putting real effort into backward compatible gaming - charges customers for every console they want to play Super Mario Bros on. That's not to say Nintendo can't or shouldn't charge money for Super Mario Bros., but there are clearly two different standards at work here. For years, gaming companies implied that bringing a classic game to modern systems needed a price tag. You weren't paying for a classic game, you were paying for the development time that went into porting that game.

But setting aside the fact that these aren't remastered editions, it's still incredibly unlikely that Super Mario Bros. needs more effort than 2000 Rock Band tracks. Super Mario Bros on the Wii U is exact same gaming classic as the NES edition, right down to its visuals and control scheme. But Rock Band 4 needs to bring everything to a new engine, which means tweaking animations, textures, resolutions - perhaps even the audio to some extent. And that's before it goes through bug-testing across PlayStation 4 and Xbox One systems. Then Harmonix will take all that effort revising content from a previous console generation... and give it away for free.

As gamers, we are not used to this behavior. We expect DLC to be locked to specific games and consoles that must be repurchased if you switch platforms. We accept that The Last of Us will get a remastered version barely a year after the original, with no discount for past customers. We feel lucky when Sony offers PlayStation 4/Vita cross-buy deals. We grumble and complain, but at the end of the day it's how the game industry works.

So how can Harmonix get away with this? Simple: Rock Band isn't marketed as a game at all. "Since the beginning, we've called Rock Band a music platform," Project Manager Daniel Sussman wrote in the Rock Band 4 announcement. "Players responded by downloading hundreds of their favorite tracks, and building a massive library of playable music."

From the context of a music library, Harmonix's decision makes perfect sense. The music industry has its own unique set of problems, but it's leaps and bounds ahead of gaming when it comes to digital distribution. If you buy an album on iTunes, those songs are yours. You can download them on multiple devices, play them on an Apple TV, run them through the cloud, whatever you want - as long as Apple supports your account, everything runs smoothly. Same goes for Amazon and Google, who offer digital services and devices of their own. The idea that you would ever need to repurchase the same song for your smartphone and tablet is unheard of.

With another publisher, Rock Band 4 could absolutely have charged money for all these DLC packs. But as a music platform, Rock Band 4 can't get away with that. Rock Band 4 isn't marketed just to gamers, but to music lovers, occasional players, and families who have a completely different set of expectations. Developers absolutely deserve to be paid for their work, but asking loyal customers to pay hundreds of dollars a second time is insane.

Of course, the ironic thing is that Harmonix's decision will probably generate more sales than it would have otherwise. Long-time players are encouraged to buy Rock Band 4 and automatically unlock a massive library. New players just starting out will have access to a entire storefront of classic Rock Band albums. Most importantly, it gets people talking about a gaming genre that was completely oversaturated three years ago.

I can't help but wonder what would happen if more games followed this model. What if fighting games like Street Fighter V included DLC characters from Street Fighter IV? Would it be so bad if Call of Duty sequels included map packs from previous games? It might take some work, but it's certainly possible - even Left 4 Dead 2 made room for Left 4 Dead's full campaign content. Perhaps the game industry shouldn't model itself so closely after Hollywood. Maybe it should take a few cues from music now and then.