Every year, we at The Escapist share our Five Favorites, a list of personal favorites from the year. I spent a lot of this year playing a lot of fantastic games. My lists tend to represent a lot of nostalgia-driven endeavors, and this year is no different. I find the familiar appealing, and I've seen so many incredible reboots of my formative gaming franchises, I can't help but give them a nod. I try a lot that's new as well, and I've played dozens of indies this year, but a couple standouts really stuck with me.

Check out my five favorite games from 2016. 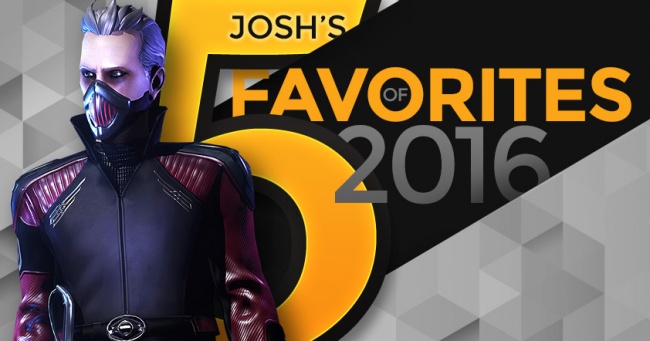 Developed and published by Giant Army. Released in Early Access on August 24, 2015. Available on PC and HTC VIVE on SteamVR. Review code provided by publisher.

Games like Minecraft haven't ever been appealing to me. I'm not particularly creative in that sense, and even if I do have a good idea, I've still never been able to execute it well. Universe Sandbox 2 is the sort of experience that suits me perfectly. I can plan if I want, or I can just throw planets and stars around until something exciting happens. When I do have a plan, and inevitably screw up, I get rewarded with a supernova or a moon shattering into a hundred fiery, orbiting pieces, after colliding with its companion planet. Gravity is a lot harder to manage than you might expect.

More than anything else, though, Universe Sandbox 2 is the first time I've ever seen a game that was able impart a sense of scale with the universe. We grow up thinking about our solar system as several orbs of slightly different sizes going around an orb slightly bigger than the rest. The reality is wild, almost unbelievable. Being able to control that scale - You can shrink the entire solar system to the size of a dime, and throw it across the cosmos, so it's just a speck of light in the distance. - will make you think about the universe in a whole different way. It even offers pre-built systems, including a model for the variable seasons in Game of Thrones, ie. A Song of Ice and Fire. If you want a show, though, there's little better than watching two galaxies collide. Universe Sandbox 2 can do that, too.


I have never been shy of my fondness for the classic games I grew up with. Many gamers will remember their early gaming experiences with rose-tinted goggles, and I'm certainly no exception. Fortunately, in the past few years, an abundance of excellent franchise reboots has rose-tinted reality for those of us that grew up with these historic series. The release of Wargaming's Master of Orion reboot this year heralded one more successful resurrection. NGD Studios' 2016 Master of Orion was faithful to the originals, with the game's core systems being basically MOO2, but was ultimately limited by its progenitor.

On the other hand, the relative simplicity does make it a fantastic entry point for inexperienced or strategy-light players. 4x isn't for everybody, but the sleek, nearly idiot-proof interface, alongside the updated characters and full VO with an impressive list of talent will certainly help reach a few more people.

Developed by id Software and Certain Affinity. Published by Bethesda. Released on May 13, 2016. Available on PC, PS4, Xbox One. Review code provided by publisher.

Every year, I try to convince myself not to talk too much about reboots and franchises, since there are plenty of delightful new properties popping up, but every year, I find myself staring down the likes of Wolfenstein or XCOM. This year, it was MOO and DOOM (oddly palindromic) that hit it home for me. As I mentioned, these were from my formative gaming years, and, on top of that, both represent huge milestones in gaming in general. Where MOO was where the "4x" genre term was coined, DOOM is pretty much how first-person shooters became a thing.

The DOOM reboot was in the capable hands of Bethesda, a publisher with a proven record of franchises and reboots, like Fallout and Wolfenstein. Better still, it was actually developed by id Software, creators of the original DOOM back in '93. With the DOOM reboot came the obligatory moral panic reboot, fearing that shooting at digital hell-spawned demons might make kids more likely to shoot REAL hell-spawn demons, which studies show can be hazardous. The updated graphics offered the most beautifully-rendered demon guts in the industry, and the ultra violence and unrepentant gore were as true to the original as it gets.

DOOM is a history lesson that all FPS gamers really should experience.

Developed and published by Clever Plays. Released on March 30, 2016. Available on PC(reviewed) via Steam. Review code provided by publisher.

At this point, I've played a lot of indie rogue-likes. I'm not quite the level of connoisseur that I know exists out there, but I've dabbled in dozens of different games, most of which will have some unique twist on the experience. Leap of Fate from Clever Plays brought some exceptional twists to the table, and looking back, it's definitely my favorite rogue-lite this year. I've compared it to another of my favorites, Hand of Fate, but with the inverse focus on the game mechanics.

Leap of Fate builds a level from face-down cards, each representing an encounter. You work your way down the pyramid shape, collecting powerups when you get a lucky chest, and dodging bullets with shadow walk while you lay waste to your enemies for combat encounters. There's a boss waiting at the bottom of the map, after which you'll proceed to the next level, with new monsters and increased difficulty. One thing Leap of Fate does exceptionally wel is the talent system, which offers typical talent trees, but they're ordered randomly each time you play, so you're always making skill decisions on the fly, and there is no "correct" build. The twin-stick combat is always thrilling, and the distinctive skills, characters, and weapons (Glyphs) ensure that every game is a whole new experience.

I'm not going to lie. Leaving XCOM 2 off my Five Favorites was hard. I included Enemy Unknown the year it launched, and Enemy Within after its release. XCOM 2 impressed me nearly as much as either of those, but I do like other franchises, and even I thought I was starting to sound like a broken record. All that to say, XCOM 2 is my sixth favorite.

Speaking of six, Firaxis' latest entry into its classic franchise, Civilization VI absolutely blew me away. There's a not-uncommon sentiment about the Civ series that the game at time of launch is often relatively thin, and waiting for one or two expansion packs is usually a good idea, if you're looking for significant depth of strategy. Civ VI launched as the most complete Civ I've ever seen. Despite impressive simplification of the game's systems and turn-by-turn operations, there were a number of updates to existing systems that kept the ease of access, while also adding more depth than I've come to expect. The interface was streamlined and the graphics were scaled back, putting the game's focus back on its systems, and the player's focus back on to planning.

Civ VI has a fleshed out Culture system, mirroring the classic Science system, with its own tech tree of civil evolution. It doesn't make the game any harder to play, but it offers more choices, which creates more depth. City planning is actually a thing, since you'll be limited by your choices, and many structures now require their own tile, often with placement restrictions. If you don't plan ahead, you might not meet the requirements for a crucial building later on.

Civ VI hit all the most important notes for me, while avoiding the franchise's historical pitfalls, and I couldn't be happier with how it turned out.

That's it for my personal favorites, but be sure to check out the rest of the team's, and we'll have our Escapist Awards 2016 coming up next week!