2016 has been another great year for games, no matter your platform of choice. The indie scene has never been better, and plenty of meaty AAA releases have peppered the calendar. Even tabletop and handheld gamers have had some hotly anticipated tiles finally arrive. My five favorites of the year are a spattering from all aspects of gaming, and the games that I'm sure I will be playing and replaying for years to come. For me, replayability is one of the most important aspects of a game. While I do love games with a great story or message that I can play through and enjoy a single time, my favorite types of games are those "endless" types, or multiplayer games, that I can just keep coming back to, over and over and over. 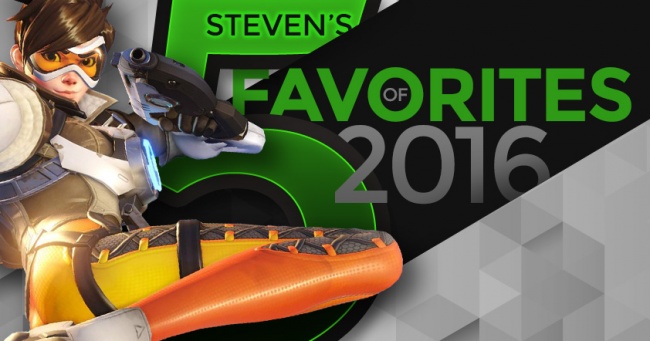 Developed by Concerned Ape and published by Chucklefish. Released on February 26, 2016. Available on PC. Review code provided by publisher.

Stardew Valley's development story is almost as incredible as the game it became. Built from scratch by a single dude who just wanted another good Harvest Moon, Stardew Valley took every aspect of its "inspiration" and improved on it. "Concerned Ape" made a game that is fun, addictive, relaxing, and deep... all by himself. Everything from the game's charming pixel art style, to its soothing soundtrack helps you lose yourself in your farm, and try to return to a simpler time.

When this game first came out I sunk hundreds of hours into it without even noticing, and Ape is far from done with it. He has already pushed out patch 1.1, and is looking to add more and more features like multiplayer in the future. I absolutely love developers and games that do this - with every major patch it's like coming back to a brand new game. At only $15 Stardew Valley is an absolute steal, and one you'll be playing long after you've put Call of Duty or Dishonored 2 up on the shelf for good.

Even if you don't know anything about tabletop gaming, you've no doubt heard of Cards Against Humanity. The "party game for horrible people," CAH's incredible success was owed to its simple gameplay, twisted sense of humor, and the fact that it was adaptable to gaming groups of any size. So, many eyes have been on Secret Hitler, CAH brainchild Max Temkin's second game, during its development over the last few years. Secret Hitler is a secret identities game in the same vein as Werewolf, Avalon and The Resistance. You and your friends play as politicians in 1930s Germany. The majority of players are Liberals, with a couple of secret Fascists, and of course, the Secret Hitler himself. The Facists know who everyone is, but the Liberals and Hitler are in the dark, which leads to hilarious rounds of deception, mind games, and baseless accusations.

Just like CAH, Secret Hitler is simple, funny, and adaptable for group sizes of five to ten. If you've never played a tabletop game in your life, or you want to corrupt your non-tabletop friends to your lifestyle, it's the perfect starting point. Best of all, if you're poor/not in the US, you can print out a .PDF version of the game to play for free!

Starbound is the "spiritual successor" to Terraria (which itself is a kind of Minecraft-inspired Pixel-art 2D RPG), and has been in development for quite some time now. While it did hit early access back in 2014, 2016 finally saw its official release, and boy has the wait been worth it. While Terraria had players explore a single planet, Starbound takes them to the stars, allowing them to explore, destroy, and colonize dozens of planets throughout the galaxy.

Even if you've never played Terraria, Starbound will suck you in with the hundreds of little things you can do. Do you want to make a farm? Build a castle? Go dungeon crawling? Finish the game's main story quest? The possibilities are endless, and just like Stardew Valley, Starbound developer Chucklefish plans to support the game for many years to come with multiple updates. If Terraria is any indication we're looking at content updates as long as five years after initial release. Not bad for a $15 investment. These kind of indie exploration/crafting games get better every year... although I feel like it will be awhile before anything tops Starbound.

Developed by Game Freak and published by Nintendo. Released on November 18, 2016. Available on 3DS. Review code provided by publisher.

Yeah, it's "just another Pokemon" but for some reason I feel like Sun and Moon deserves a bit more credit than other entries in the series. A lot of much-requested quality-of-life changes have made it into the game, its Hawaiian-inspired island-hopping setting is a nice departure from the traditional huge landmass of previous games, and the replacement of the gym system with trials makes the game feel more like an adventure through the world of Alola, rather than simply a race to collect shiny badges and beat the champion.

It also helps that the games have some of the best-designed new Pokemon we have seen since Gen II, and some awesome "Alolan variants" of classic monsters to pull on your nostalgia heartstrings. Like previous versions in the series, once you have finished up with the main story there is still a tonne of stuff to do, and if you're really on a quest to be "the very best" by taking on the competitive scene, or even to "catch them all" by trading and acquiring every single Pokemon, Sun and Moon is another game with endless replay-ability.

Developed and published by Blizzard Entertainment. Released on May 23, 2016. Available on PC, Xbox One and PS4. Review code provided by publisher.

By all conventional logic Overwatch should have been a failure. Not only was it Blizzard Entertainment's first new IP in almost two decades, it's also a shooter, a genre Blizzard has never attempted before (with the exception of the ill-fated Ghost), and was salvaged from the ashes of cancelled MMO Titan. But it wasn't a failure. It was flipping amazing. It says a lot for Blizzard, that could have just gone on pumping out spin-offs and expansions of its existing IP for easy money, that it can still take a big risk to try something new and experimental.

Overwatch is certainly not the first, or even the most unique class-based shooter we have seen but it refines the formula to the level of polish and professionalism that only Blizzard can achieve. Its colorful, charismatic characters, its simple-to-learn hard-to-master gameplay, and its short, fast-paced rounds make it perfect for unwinding with after work or school. It also helps that the balance is impeccable, and Blizzard is keeping a close eye on heroes that fall to the wayside (hello, Symmetra!) As we've already seen two post-launch heroes added to the game (for free, mind), we can also expect Blizzard to add plenty more as the years go by. Overwatch is easily my Game of The Year for 2016, and is going to be a game that I will be playing for a long, long time.