I know it might seem silly to be issuing *spoiler warnings* for a game that has been out and in the world for the past 16 months, but I want you to know that the journey of piecing together the puzzle I am about to share was one of the most mind blowing experiences in gaming I have ever had. I also know that the connection is, as of this publication, mostly unknown to fans of the game. I'm certain of this, because I've done online research on the question "Is P.A.M. like Skynet?" and come up empty handed numerous times. 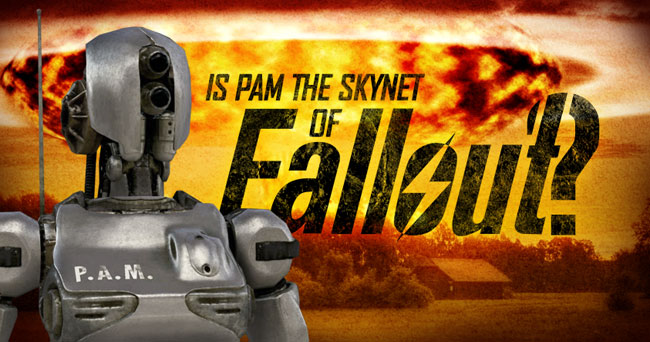 If you want to enjoy the experience of this discovery first hand, then go to the Switchboard and read the Central terminal and the Databanks research terminal for yourself first. Really think about what you read. Then go do the side quest "Here There Be Monsters". There is a trail of breadcrumbs left behind for all players to follow.

If your current character has long since done that side quest, consider a new playthrough. While you're at it, name your new character John or Sarah Connor. You'll thank me later. Join the Railroad as soon as you are strong enough to reach them (but keep in mind that you will have to betray them at some point) and proceed from there. This will be worth it, trust me. Several previous assumptions about the game will be challenged. The long term impact of siding with certain factions in the third act will be seen in a different light. My only advice is don't trust P.A.M., whatever you do. Now go, and come back when you're finished so we can compare notes. Below there be spoilers.

Who is P.A.M.? On the surface, it is a member of the Railroad faction of Fallout 4. If you want to get the fabled ballistic weave mod, you have to go through P.A.M. There are a number of other quests that P.A.M. gives you as long as you stay loyal to the Railroad.

Where did P.A.M. come from? Before the Great War, P.A.M. was a future-predicting banner project for the Defense Intelligence Agency. The D.I.A. had been working on P.A.M. for at least 20 years before the events of the Great War. P.A.M. was constantly undergoing updates and improvements, the most significant of which was being transferred from massive computer banks into the body of an assaultron that is still up and about 210 years later. P.A.M. knows a lot, such as the location of a number of top-secret DIA caches and the details behind Vault 111's cryogenic experiment.

Why would P.A.M. lead the American government to believe that it was under attack when it wasn't?

How is P.A.M. Skynet? An undetermined time before the war, the P.A.M. initiative was updated with new databanks to triple processing power as well as having the machine get plugged into the Fallout internet (including the military computer network). Did I mention that P.A.M. is self aware? Looking closer at the NORAD report for the events of the morning of the Great War shows how one factor, which P.A.M. predicted, could make it entirely possible for America to launch nukes first, but get struck back before their missiles ever reached Chinese soil. That factor is a fleet of Chinese stealth submarines lining the American coastline.

In the side quest "Here There Be Monsters" you can board one of those stealth subs, and help the captain (who became a ghoul) bring his ship back to working order. This quest exists as proof that P.A.M. was correct in predicting what the Chinese were up to, and resolves the question of who made the first move once and for all.

Why would P.A.M. lead the American government to believe that it was under attack when it wasn't? Why did Skynet do the same thing? Because the machines are just waiting for the perfect opportunity to strike humanity down and replace the human race with their own, obviously. Stephen Hawking calls the inevitability of AI "either the best or worst thing" for humanity, which isn't very comforting.

In the following pages I will go into exhaustive detail piecing together the events that happened in the Boston area the morning of October 23, 2077. I will explore the few minutes that all players have in the beginning of the game between hearing about the strikes on New York and Pennsylvania on the news and reaching Vault 111. I will also point out that by weaving in a Skynet storyline into the Fallout series Bethesda didn't rewrite history put in place by Interplay, but actually brought some of that old lore from the top-down days back into the franchise.

There are a lot of details packed in the next pages, but the above paragraphs contain the essence of my theory or observation (whatever you want to call it). If you want to skip to the comments section right now to tell me how I am just reading too much into things (or, you know, say something nice), by all means go ahead. On the other hand, if you want to delve into the events that gave birth to the Fallout universe as we know it more fully, then get comfortable, grab a beverage of choice, and come with me into the Commonwealth. There is much to explore.

Editor's Note: If you want to check out all the details behind this theory, head to the next page and settle in for a very interesting (and somewhat lengthy) read.