Fallout 4 has a pretty strong Terminator vibe to it. The whole franchise has consistently woven a number of movie references in their games since the first Fallout by Interplay in 1997. Combine that with the synth quests and Institute lore presented in Fallout 3, and it makes lot of sense that Bethesda would have that element in their most recent game. The question of whether beings with artificial intelligence have the right to self determination is one of the main themes of Fallout 4. (According to Emil Pagliarulo the game is about androids that look like humans and the suspicion that inspires whenever you meet a new face). Random encounters involving doppelgangers facing off in a fight for survival turn up once in awhile (and the choice to walk away, watch this play out, or shoot one with the hopes that they are a synth is entirely up to you). This idea of androids blending in with a crowd of people is one of the first seeds of Terminator. The original idea for the cyborg wasn't an enormous slab of beef that stands out like a sore thumb, but someone unassuming, who could be anyone (like Robert Patrick). Then there are the Gen 1s and 2s which are obsolete units that the Institute sends out in waves to be mowed down by your bullets, lasers, or missiles (less deadly than the skeletal T-600 from Terminator Salvation, but not really meant to be mistaken for flesh and blood). The most dangerous synths are Institute Coursers: unstoppable killing machines. These models were built with one primary function: seek and destroy. 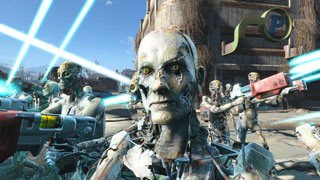 Synths are a real problem in the Commonwealth, and your choices determine their fate in the end game. With the theme of artificial intelligence so prominent throughout the game it really is a shame that Bethesda didn't go the extra mile and program a Fallout version of Skynet. It seems like a real missed opportunity, or was it?

In the ruins of Lexington there is a particular donut shop that is built above a top secret Defense Intelligence Agency facility called "The Switchboard". Most recently the site was the Railroad's base of operations, before Institute Synths attacked it and sent the group into hiding. There is a sewer entrance just outside of Lexington near a derailed train (ironic, right?) that goes into the Switchboard, but it is unmarked outside of the first Railroad quest with Deacon. This is where our journey begins.

The main project being worked on in the Switchboard was a cutting edge artificial intelligence computer known as the Predictive Analytic Machine (P.A.M.) A good amount of background for P.A.M. is contained within the research terminal in the Databanks room. Careful consideration of this terminal poses a possibility that is truly chilling. It starts with an executive summary entitled Section 1091/1092 report, which reads as follows:

The P.A.M. Initiative is already bearing fruit. Foreign operatives report that corrective measures employed in the Taiwan Strait region have already greatly stabilized matters after the Pascale Incident. The first few iterations of P.A.M.'s core code have increased the effectiveness of the program dramatically, but without drastic action we're approaching a point of diminishing returns.

The team asks for double the funding for the upcoming fiscal year. With additional cutting edge databanks we can boost the processing power of P.A.M. three-fold. Additionally, the P.A.M. Initiative needs to be fully tapped into all military and civilian agency intelligence apparatus. The combination of these two spends should give us a decided edge against the Chinese.

At first glance, this seems to be yet another engineering base with yet another request for more funding to help bring their pet project to the next level. There are several others scattered throughout the Commonwealth, so who cares, right? Except the plans for that funding were to upgrade a cutting edge military computing prototype and give it full access to all military and civilian agency intelligence computers. What could possibly go wrong with that plan?

The terminal also contains three event transcripts that span ten years and shed light on just what functions P.A.M. was made to serve. The first, from June 2067, involves P.A.M. being requested to run a war game scenario of a combined U.S.S.R. and Chinese attack.

"P.A.M., run the 'USSR China Attack' scenario."
> Processing...
> Query. What goal does entity Chairman seek in this hypothetical set of facts?
"Conquest. Run program."
> Your answer does not logically follow. An ideal nuclear first strike scenario would still leave 59% of the American nuclear stockpile free for retaliation. Posit. You cannot conquer what is destroyed.
"P.A.M., Chairman Cheng isn't always logical. He won't always make logical decisions. We've been over this."
> Warning. Human variability results in a highly flawed statistical model.
"P.A.M. Run the program."
> Warning. Warning. [Emergency Shutdown]
"Dammit. We've lost her. Power her down. Did we get the crash logs on that?"

This entry establishes that P.A.M. was programmed with scenarios involving nuclear attacks. It also appears to be a nod to the film Wargames, where Matthew Broderick accidentally hacks into a military "supercomputer" (by 1980s standards, at least) and almost causes a thermonuclear exchange because he wanted to play computer games (and the computer generates false positives for a soviet launch at NORAD headquarters). The computer in the movie was used to serve the exact function P.A.M. was designed for. The moral of the film is that a nuclear exchange is a game with no winners, which is P.A.M.'s point here.

The next log was recorded in December of 2075, less than two years before the big boom.

"Could you repeat for the general what you just told me?"
> Posit. Chinese stealth technology far outstrips our own capabilities. Posit. The Chinese intelligence apparatus is sufficient to conceal large scale research operations from American operatives. Conclusion. The Chinese have a 91% chance of having conducted large scale experimentation with Stealth Tech.
"Large scale? What do you mean? What are their capabilities?"
> American projects involving this technology (refer to "Stealth Boy") have merely reverse engineered captured Hei Gui suits. The underlying science of this technology is unknown. So the theoretical limits are also unknown. However the so-called "Ghost Fleet" that station A-31 and B-19 reported in November may indicate that testing has already commenced with submersible vessels.
"Dear God. You think they have stealth subs?"
> A second order approximation is inconclusive. Explanation the logic chain of these assumptions have too much variability. Further data is required.
"So you can't even give me a guess?"
> Machine/Human interface aborted.
"Sorry, sir. We're working on some of her glitches. P.A.M... well, she gets real stubborn when she's doing too much guesswork."
"Stubborn? She's a machine."
"Sir. With each new version, well, she's getting quirky."
"There's no way I'm taking this stealth sub nonsense to the Joint Chiefs unless I have proof. It's goddamned ludicrous to think the Chinese have been working on something this big and we've heard nothing."
> Virtually no actionable intelligence has come out of the Shaanxi Province for 3.1 years. However, the province reports a spike in the imports of complex polymers and other key synthetic compounds. The quantity in question is consistent with stealth technology research on the macro scale.
"Until you can give me something concrete, I don't want to hear another goddamned word about this." 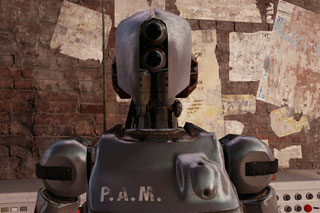 The involvement of Chinese stealth subs will come into play later. When I read it the first time I immediately thought of The Hunt For Red October, another classic film released in 1990 whose plot also centers around stealth subs and involves a close encounter with nuclear holocaust due to misunderstanding. Sensing a pattern here? The log also reveals that P.A.M. seems to experience periodic glitches, which cause her to be "stubborn". Keep in mind, this transcript is dated 2075. Imagine how much more quirky the latest and greatest version of P.A.M. must have been when fully upgraded and plugged into the network just before the bombs fell. Although it may just be a coincidence, one of the glitches in Fallout 4 is that P.A.M. will refuse to talk to you and go into "security mode" if you are too far into the B.O.S. storyline or respond to her first questline with "maybe later". If this is a deliberate nod to the story of the terminal, I tip my hat to Bethesda.

P.A.M., more than power armor and mini-nukes, represented America's best response to the Chinese technological advancements in stealth and gauss weapons. Even though it had glitches and a few loose screws, it was a crowning achievement of American engineering. It was also a project classified at the highest level, which is why no mention has been made of it in previous games. At least not by that name.

The final transcript records the transfer of the P.A.M. AI into a robotic body, which happened January 28th, 2077, less than a year before the war.

"There it is... Go ahead, unplug the cables."
"She's clear."
"What's the data integrity at?"
"We can't tell until we boot her up."
"Initiating machine/human interface."
"Jesus. She's working. The numbers are looking good."
"Commencing analysis of this geographical point in space."
" She's actually in there, I can't believe we're doing this."
"After what she pulled off in July... I hear she may be sent over to the White House."
"Assessment complete. Greetings, Doctor Mae and Doctor Ramarijan."
"The interface is really coming along."
"When she runs it. Have you seen how many cycles Malcolm is using for it?"
"P.A.M., perform primary function."
"DEFCON is currently at 3. Odds of the alert state increasing this month are 12%. In order to increase global stability a diverse set of detailed strategies must be adopted."
"I'll let the general know that P.A.M.'s mobile."

I spent quite a bit of time trying to figure out if this was based on another near-nuclear 80s movie, and drew a blank. I concluded that it works wonders in regards to Fallout storytelling anyway, because that process allows P.A.M. to survive the holocaust, and interact with the player character 210 years later.