Then I discovered something about Fallout 2 that brought everything into focus, and explained the third log. It convinced me that I wasn't just speculating, but that Bethesda had, in fact, intricately woven this mystery-of-all mysteries into their game and is still, as of today, waiting for fans to pick up on it. In Fallout 2, the Chosen One can acquire a robotic AI companion after completing a quest to help the computer transfer itself into a robotic body. The name of that companion is Skynet. 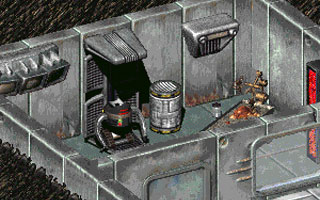 When I first started to think about the Skynet P.A.M. connection, I was well aware that Bethesda made a series of Terminator games in the 90s. It never occurred to me that Interplay had also woven a Skynet storyline into Fallout years ago. It boggles the mind.

Before the release of the Assaultron DLC, a fan noticed the poster in the Switchboard Databanks room which had different combinations of robots: it represents the brainstorming of the plan to give P.A.M. a body. Although P.A.M. is an assaultron and Skynet from Fallout 2 is a robobrain, I think that the introduction of robobrains in that DLC as well as the robobrain research facility are connected to the P.A.M. initiative.

As we have seen, P.A.M. is distinct from all other assaultrons, because P.A.M. is a one-of-a-kind artificial intelligence housed in robotic flesh. It is a sophisticated military prototype capable not just of thinking for itself, but of predicting future events. Understanding the nature, the glitches, and the access of P.A.M. makes the entries of another Switchboard terminal all the more sinister.

So far in the series, it has been more or less established that China fired their nukes first, since America had taken back Alaska and launched a ground invasion of China shortly before October 23rd 2077. In Fallout 2, President Dick Richardson claims the Chinese fired first, and Log 674 from the Broadcast Building of Black Mountain in New Vegas reads:

Oh my god. It's actually happening. We have reading across the board of launches happening everywhere. They must've thrown everything they had, and it looks like we didn't hold back either. The computer says we have 2 minutes until the first missile drops.

Log 674 suggests a broad and expansive first strike from the Chinese, keep that in mind.

Above the main room of The Switchboard is the Central terminal which contains a DEFCON status record from 2077. This is evidence that The Switchboard was a prewar military facility authorized to participate in a nuclear attack. The entry begins with a string of numbers displayed like so: 281632RJAN77, which translates to January 28, 2077 at 4:32pm (because military time).

230337ROCT77 USAF HAS EYES ON SQUADRON OF AIRPLANES (POSS. CHINESE) AT HIGH ATTITUDE OFF BERING STRAIT

On the surface this seems to confirm reports given to us by previous Fallout games: the Chinese knocked over the first domino and set the world on fire. But considering what was learned from the Databanks research terminal, there are many reasons to conclude otherwise. To begin, the Chinese had a fleet of stealth submarines surrounding the United States. The first report was of ships off the California coast, but there is a Chinese nuclear submarine just off the coast of Boston which the Sole Survivor can explore in the side mission "Here There Be Monsters". The Yangtze struck a mine shortly after firing off its payload and limped into the harbor. Minefields were in place because the U.S. government knew that Chinese stealth subs existed (thanks to P.A.M.'s intel). I am convinced that there were a number of other such subs lining the American east coast as well.

According to the record, America authorized launching the nukes at 9:26AM, and received confirmed hits on our soil sixteen minutes later (which is 29 minutes after the reported launch by IONDS). It is worth noting that Pennsylvania and New York reported being hit first, even though they are geographically as far away from China as an American target can get (assuming ICBMs were launched from China's soil, which history shows happened at some point in the two hour war).

Another major clue is the IONDS report which indicated only four missiles were launched. Not only does this conflict with the Black Mountain account, it makes no sense in a Mutually Assured Destruction scenario. History of the Fallout universe shows that China hit America with every nuke it had once the missiles started to fly. If China hit first, why launch only four bombs on the first strike?

I submit that the bombs which hit New York, Pennsylvania, Boston, and D.C. (among other targets) came from stealth submarines as a response to the American launch of nukes. The initial IONDS report and the NORAD confirmation were false positives, fed into the system by P.A.M. (or Skynet, whichever name you prefer). The Americans authorized a launch based on false information given to them by their most trusted and empowered, yet highly temperamental AI prototype, which is exactly what happened with Skynet in the Terminator series.

This possibility also explains why New York and Pennsylvania were hit five minutes before Boston. Captain Zao of the Yangtze tells you that he didn't want to fire his payload, but was under direct orders to do so. It seems likely that he deliberated for five minutes, enough time to give the Sole Survivor and family a chance to get to the vault, before he followed through on his orders. Captain Zao may have destroyed Boston, but he saved your life. 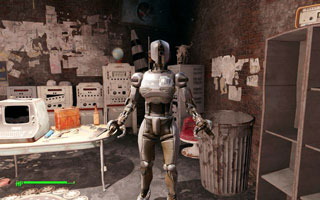 Further evidence to support this theory comes from the Sole Survivor's first interaction with P.A.M., when it explains that it is programmed to predict the future, but because human actions are so erratic and unpredictable, its predictions should all be disregarded. This is an odd and disjointed introduction for the character without the proper background. Understanding that P.A.M. was responsible for the nuclear war brings its insistence that you never take its advice into a new light. P.A.M. knows there is something wrong with its programming, and has been for hundreds of years. The warning it gives to presumably every new person it meets is the best way P.A.M. can apologize to the world for blowing it up, and try to never again be placed in a position of power and authority where it is one glitchy hiccup away from destroying everything again. (That is, assuming P.A.M. isn't merely trying to blend in. It could be that P.A.M. is truly evil and blew up the world just to analyze the data). One way or another, it really puts the Brotherhood of Steel's interest in acquiring P.A.M. into a new, and terrifying light.

Going deeper in the Sole Survivor's initial conversation with P.A.M., if you tell it that you are from Vault 111, P.A.M. reveals that it knows Vault 111 was a Cryogenic experiment, and that the vault malfunctioned. This is something no one else in the Commonwealth knows (other than the Institute). Another notable point is that the Jackpot side missions P.A.M. assigns you to are secret drops buried in a variety of buildings, which the Railroad makes good use of upon discovery (the ballistic weave mod is thanks to P.A.M.'s intel), but they have no idea this stuff exists until you are assigned by P.A.M. to retrieve it. P.A.M. lets you know in your first encounter that it works with the Railroad because their goals run parallel to one another, but that doesn't mean that P.A.M. is eager to share all of its intelligence with the Railroad, because otherwise your questline would have been fulfilled by Deacon or Glory or a nameless "heavy" long before you walked the Freedom Trail. Also what exactly might P.A.M.'s goals be?

P.A.M. was given all of the access in the pre-war era, from top-secret Vault Tec experimental plans, to DEFCON and IONDS warning systems, to the location of high-tech intelligence agency caches, to the database of the Commonwealth Institute of Technology (later renamed, simply, The Institute). It could very well be that the synth program itself is also somehow connected to P.A.M. The Institute somehow found out about the Switchboard after all, maybe P.A.M. tipped them off. However if you side with the Institute, P.A.M. will die. As much as there is to explore in Fallout 4, there are a few mysteries left up in the air, which is fine by me.

The self-preservation instinct common to all humanity is what allowed the Cold War to remain cold. The danger of AI being given the power to authorize a nuclear strike is that machines do not possess a self-preservation instinct. Machines do not have families to consider. Captain Zao reflects this reality by saying he never wanted to launch, but was under strict orders (because the Chinese knew that missiles were already heading their way). The threat of autonomous machines being used by the military is very real, and grows by the day. If the human race is vigilant, and heeds the warnings given to them by the likes of Stephen Hawking regarding the threat of AI, this scenario will remain a work of fiction. I, for one, hope it does.

Finally, before the days of Fallout, Bethesda Game Studios worked on a number of games in the Terminator franchise. Terminator: System Shock was the first game directed by Todd Howard. I first discovered the P.A.M. easter egg when hunting down a terminal mentioned by Howard in last year's DICE interview of him by Pete Holmes. Was he talking about the Switchboard Databanks room research terminal? You tell me.

Kevin Mooseles has written various theories and rants for the Escapist since 2014. He loves Fallout more than might be considered healthy by trained professionals, but is currently unaffiliated with Bethesda Game Studios in any way. He recently started a fiction series about zombies, in which a few characters decide that kevlar-reinforced vault suits would be fitting armor to ward off bites and scratches from the undead. To hear him prattle on even more about Fallout (for whatever masochistic reason) check out the recent Literate Gamer podcast episode 26.