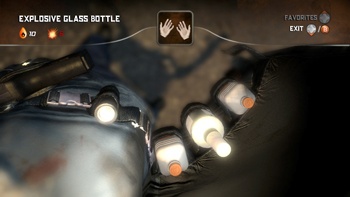 I love a good screenshot, especially one snapped from an up-and-coming title. In fact, I've long believed there's no quicker way to get a read on a game I haven't yet played. I don't always want feature lists or developer interviews. Sometimes a good screen grab is all I need.

I'm not talking about those carefully staged, artfully cropped pseudo-screenshots that show up on official websites and the backs of game boxes. You know, those images that aren't really from the in-game camera's perspective and that conveniently do away with any interface elements. I'm talking actual, in-game screenshots, complete with targeting reticules and health meters and minimaps.

There's a language to every game screen, one familiar to most gamers. The position of the camera, for example, is immediately evident and has unavoidable implications for a game's design. Does the world spread out before me in all directions, or does it roll across the screen? Will I see through the eyes of my character, or will I be piloting an avatar through physical space? Is the fate of an individual in my hands, or will I be managing the efforts of entire civilization?

And then there's the interface. A mere glance at a screenshot will tell you whether you'll confront the world from behind a set of crosshairs or from above a battlefield. You'll see what you'll be tracking from moment to moment, be it mana or resources or XP or ammo. If you'll be adventuring with others, you'll know, and you'll probably be able to tell whether they'll be real-life friends or computer-generated companions.

RTS, RPG, JRPG, FPS. Pick a genre acronym, and there's a generally recognizable camera position and interface to go with it. In fact, the camera and interface information in a single screenshot may be enough make or break a gamer's interest in the title it depicts. Which, for better or worse, demonstrates the strength and uniformity of established genre conventions. Games look the same because they play the same.

Not that there aren't exceptions. While many developers still clutter up screens with pictures of controller buttons and the like, plenty more seem ready to do away with interface contrivances altogether. Fight Night Round 3 and King Kong, to name a couple of earlier examples, dropped HUD elements to provide feedback to players through in-game effects. More recently, Alone in the Dark (pictured) followed suit. Upcoming titles like FarCry 2 and Dead Space continue the trend by taking maps and inventories out of separate screens and building them directly into the game world.