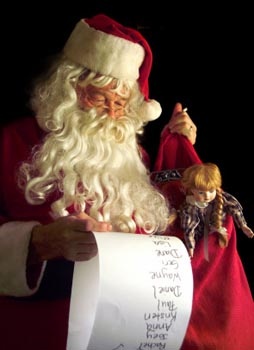 It's December! That special, magic night is drawing near, and once again I've put together my list of Christmas Wishes in the hopes that maybe this year I'll actually get something that doesn't look like the only reason it's under the tree is because it died and fell out of it.

Just kidding! I know you do your best. You're very busy, and there are good little boys and girls all around the world who are trying just as hard as me to be extra-good so all their wishes will come true. What they've got that I don't is beyond me, but you're the one who's making a list and checking it twice! Seriously though, I've been really, extra, super-good all year long, so if you could find it in your heart to give me even just one thing I ask for this year, I'll never forget it and I'll be even more extra-good next year.

Okay, here it is. Try your hardest!

DRM that works for everyone. It sounds crazy, but it's becoming increasingly apparent that it's both unavoidable and absolutely necessary. The idea of a DRM-free universe is a pleasant fantasy but it ain't gonna happen. A handful of independents notwithstanding, publishers are committed to effectively protecting their property against copying and that's not going to change just because we stamp our feet and call John Riccitiello bad names. Even Rockstar, the industry darling and fanboy favorite, is jumping on the SecuROM bandwagon with the PC release of Grand Theft Auto IV. What's a poor gamer to do?

What we need isn't the abolition of DRM, but rather DRM that does everything it's supposed to do and nothing it's not. Keep the games from being illegally copied and distributed; impose no restrictions on legitimate purchasers. Once that's done, the only people left to complain are the ones who aren't interested in great justice so much as they are in just not paying for the games they play, and they're not going to get much sympathy from anyone. The technical challenges are considerable, but even stickier is the need for compromise on both sides of the argument. At this stage, Santa, I think you're the only one who can make that happen.

An R18+ videogame rating for Australia. Okay, so I don't live in Australia and if I was being completely honest I'd admit that I don't particularly care what happens there. But the so-called rating system they're forced to put up with is an utter abortion that not only fails to serve the vast majority of Australian gamers but seems to employ a certain degree of randomness as well. F.E.A.R. 2 is banned but Grand Theft Auto IV is okay, but only on the PC? How the hell does that make any sense? I think it'd be great if you could work some of your St. Nick magic and give our brothers Down Under a bit of a break.

No more shitty movie game companies. This one should be easy: Just make sure that horrible accidents befall any and all executives from either the game or the movie industry who say things like "Top Hollywood creativity plus top game talent should equal great games." We dodged a bullet with Brash, but why run the risk that the next half-assed start-up won't collapse under its own weight like a force-fed chicken about to take a ride to the Colonel's? So keep your finger on the pulse, and if a few bored Hollywood types start rustling up the cash to make a crossover leap into the game business, then you do what you have to do.