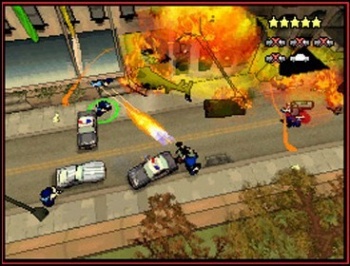 The first screen shots of Grand Theft Auto: Chinatown Wars brought to mind Rockstar's initial forays into its now famous franchise. A top down perspective, some figures running about; it was about what we expected of a game forced into the constraints of the DS hardware. The PS2 worthy incarnations of Liberty City and Vice City Stories would just have to remain on the PSP. Given the scope and ambition of the GTA series, bringing it to the DS seemed like a futile exercise at best. And yet here I am, in the hot stuffy van Rockstar is using as a demo station, watching their ambitions overwhelm me again.

Rockstar Leeds wisely realized GTA: Chinatown Wars was a game that had to be more than a simple port, it had to be built from the ground up for the eccentricities and demands of not only a portable console, but one with limitations and unique control scheme of the DS. This is much is evident as the opening of the game ends and the player finds himself tapping on the windshield glass of the sinking car the game's main character, Haung Lee, is trapped in. A few taps and you've broken through the glass and you're out of the water and into the streets of Liberty City.

Driving through Liberty City, you're struck not by the ever changing bird's eye view perspective and bold outlines of the cell shaded graphics, but by the amount of activity and detail in the game. Every building looks different and there's a wonderful variety of architecture that makes your journeys through the city far from monotonous as you drive underneath train tracks and bridge I -beams. Mailboxes, light posts and store signs have all been individually rendered and react when cars careen into them. Just as impressive are the numbers of pedestrians, all of whom go about their daily business on separate AI routines. You'll also notice the size of the city. While I didn't get the sense it was as large as the city in Grand Theft Auto IV, it still had every borough and many of the same landmarks. The living breathing world of GTA IV has found a way to exist on the DS on its own terms.