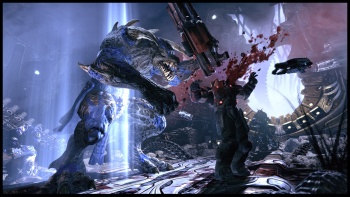 It must have been a little strange for the developers at Epic to watch their flagship product - the Unreal series - become a second priority. Since the 2006 release of Gears of War, the first break-through hit of the current console generation, Epic's other gritty shooter somehow feels less relevant. As a Mac user without a PS3, I never played Unreal Tournament 3, and I never felt like I was missing out - until yesterday.

Epic Games invited a handful of game journos to their Cary, NC offices for some hands-on time with the Unreal Tournament 3 Titan Pack, their first major upgrade to the 2007 PC and PS3 title. (Sorry, 360 owners - your Unreal will remain Titan-free for the time being.) Available for download on March 5, the Titan Pack lies somewhere between a major patch and a minor expansion on the continuum of game updates. On the one hand, it's entirely free, and the additions, like the game itself, are almost exclusively multiplayer-based: 16 new maps, two new game types, new weapons, characters, vehicles, power-ups, etc. - not to mention a host of UI, interface and performance improvements. On the other hand, it lets your character morph into a giant, 30-foot-tall monster and ground-slam everyone in your vicinity into piles of quivering giblets.

That's thanks to the Titan mutator, an add-on that converts your kills into a sort of "rage meter" that sits in the lower-right corner of your screen. Fill up the meter, and you can activate Titan mode, whereby you triple in size and gain an ultra-powerful homing rocket launcher and AOE ground-pound that either stuns or dismembers your opponents depending on their proximity to you. You also quadruple your maximum health and armor, and when you're finally taken down, your corpse becomes a nuclear bomb that obliterates everything in the room.

If you're not taken down, however, things start to get a little ridiculous. Accumulate enough kills in Titan mode, and you turn into a Behemoth, a creature twice the size of a run-of-the-mill Titan with an even more powerful ground-stomp and 30 seconds of invincibility. After your 30 seconds is up, you're shrunk back down to mere Titanic proportions until your carcass finally explodes into an orb of fiery death.

The Unreal series isn't exactly known for its subtlety, but I don't think any of the writers in attendance were prepared for the utter absurdity of Titan mode. It wasn't a rare occurrence, either - in most of the matches we played with the Titan mutator turned on, it was rare for you to go a whole match without becoming a Titan. Morphing into a Behemoth wasn't quite as common, but that's to be expected for an ability that is more or less God Mode.

On our guided tour through the Titan Pack, we sampled all of the new maps, tried many of the new weapons, vehicles and power-ups and played numerous matches of the two new game types, Greed and Betrayal. Greed was probably my favorite: A cross between your standard deathmatch and capture-the-flag, this game type has you collect the skulls of fallen players and deposit them at your enemy's base to score. Betrayal was a bit harder for me to grasp, but it's probably deeper as well. To win, you must cooperate with your teammates to rack up kills, then assassinate one of them to take all the credit for yourself.

Ultimately, however, there's a reason Epic named it the Titan Pack, and it doesn't have much to do with Greed or Betrayal. For god's sake, you can turn into a freakin' 30-foot-tall leviathan and take out half the opposing team just by tapping your goddamn foot. I'm getting amped up just thinking about it.

This must be what Cliff Bleszinski feels like all the time.

Jordan Deam lives every day like it's Titan mode.