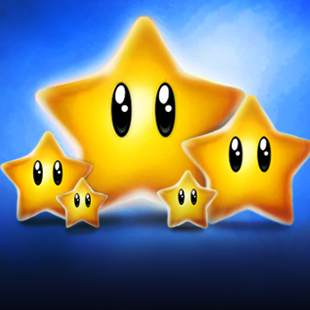 Hi there! Welcome to the Escapist's reviews hive. Yes, we review videogames, and sometimes you'll love the things we write. Sometimes they'll make you really mad though, unless you're emotionally stable. We hope you are. Anyway, let's get cracking on how we do things around here, shall we?

First of all, the Escapist rates things with stars. Stars are pretty, and Moby did that song about them. We have five full stars, and also award half-stars to achieve a ten-point system. With us so far? It's easy! This is patronizing. Sorry for that.

Here is what the star system means. Haha, star system. It's like space.

Five Stars: A five-star game is the current pinnacle of its genre, an example other games should follow. Nothing is perfect, but a game capable of achieving five stars is as ideal as games get. Five Stars are relative -- another game may come along one day that bests it in its genre, but right now, this is as good as it's ever gotten. Four and a Half Stars: A superb game that has one or two problems just significant enough to position them beneath the top dogs. If games were Decepticons, these would be Soundwave. Top quality, unquestionably effective, but not quite Megatron. Four Stars: Great games, boasting a level of effort and quality that most people could agree upon. Not everybody though. They may suffer from a few issues, or contain a number of elements that aren't to everybody's taste. They are, however, fully worth considering. Three and a Half Stars: These are your good games. They're not always glamorous, not always polished, but they are fun, or otherwise able to draw desirable emotional responses from the player. There are criticisms to be had, but overall the positives are abundant. Three Stars: Average games for an inoffensive time. Some could call them mediocre, while kinder gamers may just say they're alright. They're not bad, and they're not going to make you angry, but by the same token, they don't really do a great deal of anything else. Two and a Half Stars: Below average. These are games in which disappointment has noticeably crept into the experience. Dedicated fans will probably still find things to like, but for most people, the positives just aren't enough to outweigh the barren majority. Two Stars: A game that could have been promising. It had some neat ideas, or was built on a solid foundation, but something went dismayingly wrong. These poor efforts have cashed in their chance to be good on something less than sub-par. What a waste. One and a Half Stars: Just straight-up bad games. If they ever had a glimmer of potential, that glimmer was buried under dirt and degradation. Sometimes you can still see the grasping hand of quality, clawing for release, but you'll never be able to touch it. Bad, bad, bad. One Star: Not just bad -- offensively bad. This does not necessarily mean unplayably broken, though it can certainly mean that too. Sometimes the game does work, but its content is so unintuitively designed, intellectually insulting, or even morally bankrupt as to render it beyond salvation. The Dread Half-Star: What happens when you encounter a game so incompetent, so broken, so truly vile that you cannot even bear to play past the halfway point? Such games get less than a star. The ultimate "In Case of Emergency" resort, the Dread Half-Star is wielded only for those games in which the reviewer was battered into emotional submission after only a fraction of the experience. Requiring special permission (and the use of three obsidian keys held by different people), the Dread Half-Star shall rarely be seen ... but its appearance spells only doom.

I'm Jim Sterling, your new reviews editor, and it's my thorough pleasure to serve you. It is my goal to put The Escapist's reviews on the map, and to ensure videogames are given the level of criticism they deserve. I shall work tirelessly to have The Escapist counted among the most harsh -- but the most fair -- review outlets in the industry. You are fiercely devoted gamers, and your passion keeps the industry ticking. You deserve a minimum level of quality, and it is your right to expect high standards. You should demand it. The Escapist should demand it. Let us demand it together.

There are times you will hate me for the things I do. There are moments where you shall scream for my head. You will demand I be fired. You will call me a hypocrite. You will accuse me of unfair bias and you will ask how much a publisher paid me off. But all that I do is done for you. I am your humble servant, even as you curse me for an enemy.

Because I am Jim Sterling.

And thank God for me.