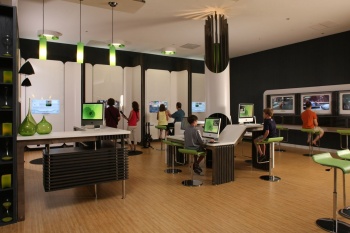 When many people go on vacation, they want to soak in the sun on the beach or whack a few golf balls on the links. When gamers take a trip, though, they might want to spending the evening relaxing and playing some of their favorite games. Some resorts offer coin-op arcades with old cabinet videogames or a basketball shooting game, but nowadays these pale in comparison to current gen consoles and the connectivity of gaming PCs. Ultimately, unless you have a killer laptop or a predilection towards handheld systems, it's difficult to scratch that gaming itch while vacationing. Spending so much time away from your hobby suddenly doesn't feel like a vacation at all; it's more of a curse.

The Ritz-Carlton Naples Beach Resort in Naples, Florida decided to change that. Former hotel manager, David Rothwell, conceived of a place where his guests could play videogames and access social networks in modern comfort. Rothwell had previously designed and implemented a children's center called Nature's Wonders, but that attracted mostly kids 10 and under, leaving the teenagers, too young to enjoy the spa or play golf, wandering around the resort with nothing to do.

"He actually had two boys around that age and he asked them, 'Hey, what kind of things would you like to do?' and they said 'I want to play videogames,'" said the recreation director at the Ritz-Carlton, Kristina MacNicol. The resort had, at that time, a room called the Loggerhead Arcade, which was populated with cabinet games like Donkey Kong and Pac Man, but Rothwell wanted to "Pump it up."

So they tore down the Loggerhead and replaced it with the VUE. "We actually coined the term VUE: Virtual User Experience. It really captures what the space is," said MacNicol. "I like to refer to it as a Game Room 2.0. It's pretty elevated in that sense."

VUE has 3 Xbox 360s, 3 PlayStation 3s and 4 Wiis all hooked up to individual 40" Samsung HDTVs. The room is sleekly designed with modern furniture in black and white, with green accents. The bamboo floors are a nice counterpoint to the "dramatically lit" column in the center of the room. It looks like the set of a Microsoft E3 presentation smashed into an Ikea store. Surrounding the column are 6 iMac stations where you can check your email or update your Facebook status. You can play Rock Band in one section or you can sign out Avatar on BluRay and sit back to relax in the more comfortable viewing lounge, with Bang & Olufsen surround sound and a 63" LCD.

While VUE was designed with the teenager in mind, young kids and adults find themselves drawn to the space. "Most of the time, the four year olds know more about the Wii than even I do. I get beaten all the time by young kids in there," MacNicol said. "They'll come in and I'll offer to set it up for them, but they'll grab the controller and say, 'No, I know how to do it.' I tell the parents, 'Don't feel bad when they beat you at this game. It's Mario Kart and you have 20 years driving experience, but they will beat you at it.'"

There is an ever-growing library of games to play in VUE which range from "E for Everyone" to "M for Mature." Parents can sign off on which ratings their kids are allowed to play, but MacNicol makes sure that they are aware that other kids may be playing M-rated games in the space. "We'll make sure that your child will not play [M-rated games], but they are being played here. I haven't had any issues with that at all," she said.