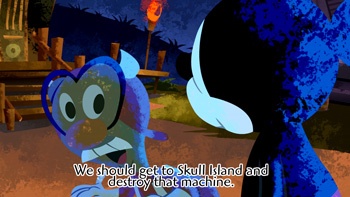 Here Comes Hollywood
"The biggest names in Hollywood want to get into games," Warren Spector said in a 2005 interview with The Escapist, describing how some of the biggest names in the entertainment industry had been flying him across the country, first class, to offer him money to make their games.

"At these Hollywood meetings, the same thing has happened to me more than once, with multiple people," he says. "I describe the game I want to do. I tell them, 'I can deliver you a triple-A title for this cost.'" Spector names a high figure; no one has ever yet written a check that big. "They think it over. Then they say, 'What could you do with twice as much money?'"

According to Spector, the reason Hollywood is flocking to the games industry - to him - is simple: Games are a better gamble than movies.

Movies aren't showing double-digit annual growth any more, the way the game industry does. People in Hollywood say, 'Okay, four out of five games lose money, just like movies - but if I get a hit like Halo or Grand Theft Auto I can make, what, a hundred million, 200 million? And making a game costs way less than making a movie? Wow!' So I've been meeting with lots of people - they're flying me around first class - it's just nuts. ...

In 2005, this was so much hyperbole. Who would believe that Spector, a veteran of the infamously bombastic Ion Storm - whose biggest hit was the overly-complex and deeply flawed Deus Ex - was telling the truth; that Hollywood studios were actually lining up at his door to shower him with cash? Who would believe that Hollywood was turning sour on the silver screen? Or that Spector, one of the most mild-mannered developers you'll ever meet, would be the future of gaming? No one, really, and that's the point.

The Most Powerful Heart
Three years after telling The Escapist about his adventures in Hollywood, word started leaking out that Spector's new studio, Junction Point, was working on a game for the Walt Disney Company, starring Disney's greatest (and most lucrative) creation, Mickey Mouse. Even then, with the evidence before us, it was hard to believe. Spector, in a characteristically polite, yet terse communiqué, refused to entertain my speculation on-record, replying only that he'd put in a good word for me to the PR handlers at Disney. (Disney never called.)

Epic Mickey was officially announced in October of last year. It was at once a triumphant and dizzying announcement. Spector's talk of hundred-million dollar budgets and Hollywood plane rides was all true and then some. Spector's new dance partner was none other than the biggest of the big, creators of the happiest place on earth (tm), and this year, at Disney's ridiculously artistic E3 booth, Warren Spector's gigantic floating head explained the thinking behind Epic Mickey:

"One of my goals with [Epic Mickey] is to confront Mickey with the kinds of challenges worthy of a hero," Spector says. "The power of Walt Disney's imagination brought into being this alternate world called 'Wasteland, where all of Walt Disney's forgotten and rejected characters ... end up."

Mickey's fiddles with "The Creator's" tools and inadvertently creates a monster which sparks a violent war with the hero of Wasteland, Oswald the Lucky Rabbit, one of Disney's very first forgotten characters. This war ravages Wasteland and opens the door for Oswald's enemies to pluck Mickey out of his world, trapping him in Wasteland in an attempt to steal from him the one thing Wasteland lacks: a heart.

"Mickey has the most powerful heart," says Spector, "and the villains of the piece are going to use his heart so they can get out."

Mickey escapes, but when he discovers he's responsible for destroying Wasteland, he vows to stick around and make things right.