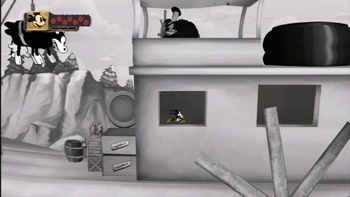 "The state of the world, of the main character and of the characters the hero meets along the way must change as a result of the hero's actions," wrote Warren Spector in his epic treatise for The Escapist on "Next Generation Storytelling," published in 2007 (in four parts.) "Your story should be about something - and not just the surface level series of events that make up the plot. You need a subtext. What your story's really about, regardless of what the box blurb says it's about."

Using this logic, Epic Mickey, then, is about the redemption of a man/mouse who tinkered with things he didn't understand and destroyed something beautiful in the process. As game premises go, it's dark, but beautiful. One wonders from what tortured part of Spector's soul - and two decade-long game development career - it originally sprang.

Too Much Choice is a Scary Thing
Playing Epic Mickey reveals a number of paradoxes. The world and characters are based on the settings and characters created by Disney. They are therefore colorful, fanciful and light. And yet, this is Wasteland, a world that has been tortured by decades of war. It is equal parts cheerful and devastated. It is both the happiest and the most miserable place on earth.

The manner in which Mickey interacts with this world presents perhaps the most compelling dichotomy. In order to accomplish the tasks that he is given, Mickey will use either the power of paint or the power of thinner. One creates, the other destroys, yet both are treated as equally effective and acceptable ways of solving problems. The idea is that the game will not judge you for the course of action you choose, but your ability to interact with the world and the people within it will be altered. You can play the game however you like, but there will be consequences either way.

Spector discusses the thinking that led to this design decision in Part One of "Next Generation Storytelling":

We decided to ditch the idea of calling out specific player choices and redirecting the game as a result of whether you killed someone or snuck past them, or which choice you made from a menu of conversation options, or which of three doors you chose to use to leave a particular room.

That was the granular approach we took to player choice in the first Deus Ex games. Instead, we started working on the idea of tracking the general trend implied by countless small player choices.

In Epic Mickey, this manifests in how you choose to use Mickey's thinner or paint, as well as in the simple mechanics and choices you must make through the course of the game. In a mission I was able to play at E3, Mickey is given the task to find a certain number of masks for a character, Tiki Sam, who collects them. Mickey can choose to collect all of the masks and return them to Sam, or he can collect one, give it to Sam, then use his thinner to thin out the rear wall of Sam's hut, steal the mask back and continue to re-sell the same mask to Sam until Sam believes that he has collected every mask. One course of action has consequences, in that you will spend more time collecting masks. The other also has consequences in that Sam may eventually discover your trickery and punish you for it.

"Once we can create beautiful, photorealistic spaces, players will expect us to do so, and then we'll have to teach our NPCs how to navigate through and interact with ever-more complex worlds appropriately," writes Spector, in "Next Generation Storytelling for issue 94 of The Escapist:

A story is constructed of sentences, strung together in a coherent, dramatically significant order. Game "sentences" are the actions available to and selected by a player. The more sentences we allow players to construct (in other words, the deeper the pool of options we offer), the cooler and more numerous the story possibilities will be. To that extent, a robust world and character simulation - both made possible by next-gen hardware - will allow us to tell a better story. But there's a hitch: audiences will come to expect a certain level of believability in the worlds they explore. They will expect the world to look and behave the way the real world does. ("It looks real; it'll act real.")