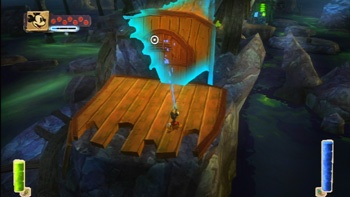 What Spector is saying is that the more real your game world looks, the more realistically players will expect it to behave. Put in a realistic building with a realistic door and player will expect that door to open, whether or not you've written what goes inside the building. To create a true "open world" then, you'll have to make every door open to a realistic interior - and make every object interactive.

To paraphrase the analogy Spector used in his presentation on this topic at GDC 2007, imagine if you want to give the player the ability to start a fight in a bar, and you want for every item in that bar to be interactive. You've now created a scenario in which you not only have to write code for every person with whom its possible for the player's character to interact, but for every person that person could bump into as they get punched and fall down, every chair that every person may be sitting in, every table at which they may be sitting, every glass on every table and every drop of water in those glasses. That's not to mention every shard of glass each glass could shatter into, every bottle on every shelf, every bullet in every gun and every key on every piano. The list is almost infinite.

"We may ... have missed our opportunity to play with story-friendly AI and procedural story generation," writes Spector. "That moment may have come and gone back in the day of lower-fidelity world sims. Now that we're in a world of high-fidelity worlds, all of our energy is likely to be sucked up just maintaining the levels of AI we already have! The cause of non-navigational/non-combat AI will take a backseat again."

Attempting to create a world in which the player could potentially solve every problem in as many ways as he can possibly imagine creates similar problems. Additionally, it could lead to an experience that's not actually any fun - a game that no one will want to play.

Too much choice is a scary thing, capable of paralyzing people. (As I learned to my chagrin on Deus Ex!) Story can help push players toward choices that are well-supported by our game systems and away from choices we don't support. Story can help identify strategies that are likely to succeed.

Since we don't simulate all possibilities in even the most open-ended game, and since you don't interact with our game-worlds the way you do with the real world, we're constantly struggling with issues of player training and player direction.

The Importance of "No"
One of the quest challenges that I faced in my brief preview demo of Epic Mickey was to retrieve a certain item from a member of a pirate crew. He offered to give it to Mickey, but only if Mickey would help him with his problem, naturally. His problem: He needed to impress a girl.

In order to help this pirate, Mickey had to find out what the girl, a black-and-white cow, wanted most and then find that thing - whatever it was - and give it to the pirate so that the pirate could give it to the girl. In RPG game terms, it's a fetch quest, but with a twist. In talking to the girl, Mickey discovers she's both lactose intolerant and likes flowers. Of the few things Mickey can acquire at this point in time, one of them is a flower, the other an ice cream cone.

Mickey can give either the flower or the ice cream to the pirate and the pirate will then offer that object to the girl, fulfilling Mickey's obligation, but one, obviously, will not be a suitable gift. The flower is harder to come by, taking more time and resources to fetch. The ice cream can be purchased from a merchant a few steps away. If you give the pirate the flower, he will win the girl's heart and the storyline form that point forward will reflect this. If you give the pirate the ice cream cone, he will discover to his chagrin the cow's peculiar intolerance. He will not get the girl, and as a consequence will not grant Mickey access to a special item hidden in a chest and the story will be similarly impacted.