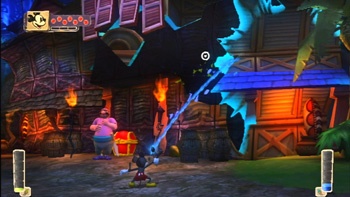 This kind of choice isn't unique to Epic Mickey, of course, but it is enlightening to see the thinking behind limiting agency to a few (or even two) simple choices. According to Spector, reducing a player's options isn't a bug, it's a feature.

"Real, total freedom isn't the goal - should never be the goal," writes Spector. "The Holodeck is a hollow promise and not something we should aspire to. Constraining players - saying, 'No' in as unobtrusive a manner as possible - is one of the most important things we do as designers. And story is the most natural, least obtrusive player constraint tools we have. How could we not use it?"

The Power of the Mouse
Perhaps the most startling and evocative design philosophy espoused by Spector in his 2007 treatise has to do with nothing so lofty as player agency, AI programming or open-world, problem-solving character design, but instead with character design itself.

Epic Mickey features the most recognizable trademark in the world, belonging to one of the worlds' most successful media companies, and in order to tell this character's epic story, Junction Point Studios was given access to Disney's entire catalog of characters, spanning 90 years of animation history - something no other company has ever been granted. This may have something to do with Spector's particular genius at talking to Hollywood executives, or perhaps his University of Texas master's thesis on cartoons, or it must just be serendipity. Whatever the reasons, this investment is fortuitous for a developer who, in 2003 earned jeers from his fellow game developers for suggesting licensed properties would be the future of game design and who has long espoused derailing the train pulling the industry toward photo-realistic graphics.

"At Junction Points Studios we're thinking that a move to more iconic, not more realistic, characters might be the way to go," wrote Spector in 2007. "As Scott McCloud says in is wonderful book, Understanding Comics, it's easier to identify with an icon than a photo-real character, easier for a developer to put, and a player to read, emotion into a simple rendering of an iconic face than into a stiff, wooden simulacrum of a man or woman. And a character that doesn't look "realistic" can't be held to the same standards of realism and believability in movement or even behavior as one that mimics a human being (or tries to)."

Spector is referring to the Uncanny Valley effect, in which attempts to create realistic representations of people backfire, causing those who view the simulacrum to recoil in horror at the lifelessness of a seemingly life-like being. With an iconic character (or a familiar cartoon character, Like Mickey Mouse), there's no danger of falling into the uncanny valley, rather, audiences are likely to more readily identify with the character due to its familiarity.

Spector expressed concern in 2007 that an iconic approach might not work for every game and that some publishers (not Disney) may not want to invest in a game that didn't feature a photorealistic badass in shades of brown. But, he expressed hope that the approach showed a lot of promise. One need only look as far as the flood of successful Mario games for proof of this premise, and one assumes Mickey may be the next iconic character to prove a blockbuster videogame success. One thing is for sure: Disney is betting on the fact Warren Spector can make it happen.

The question remains then: Has he? It's too early yet to tell. With the gigantic install base of the Wii and the brand power of the Mouse, the odds are definitely in favor of Epic Mickey making a splash when it releases this September, but so far it's too early to tell if the game will be worth the investment of time, money and brainpower and if it will be - most important of all - any fun. Disney's betting it will and Warren Spector's gambling his career on it. If you're looking to bet on a winner, you could do far worse than these two.