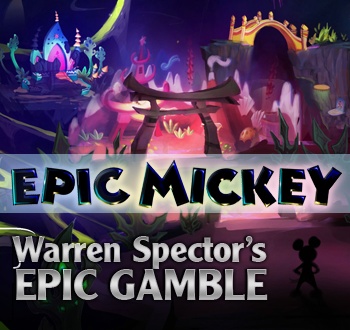 "I hold up my own career as an example of the ability to do original work in someone else's sandbox." Warren Spector

If you haven't played one of the many classics that Warren Spector's had an active hand in developing (like Deus Ex, System Shock, Ultima Underworld or Thief), you will surely have played at least one game that borrows heavily from the many innovations to the various genres these games inspired. Yet one of the reasons why you may not know this - why you may not know Spector - is that for the past several years he's been in self-exile, plugging away at a super-secret project deep in the heart of Texas. A project that - until very recently - he couldn't even talk about. A project we now know as Epic Mickey.

At E3 2010, I had the opportunity to play a brief hands-on preview of Epic Mickey amidst the surreal artistry of the Disney booth, where painters were creating custom portraits of passersby and freestyle dancer/painter/performance artists were gyrating to electronic techno beats while creating improvisational masterpieces of neon and glitter-paint before a stunned crowd. Above the chaos floated the giant head of Warren Spector, projected onto a jumbo-sized screen as he extolled the virtues of his latest creation.

In the game, players take on the role of Mickey Mouse who, through his reckless curiosity, has managed to unleash a terrible evil upon the inhabitants of an alternate world where all of the forgotten and discarded characters of Walt Disney's past have made a home for themselves. As Mickey, it will be your job to fix what you wrecked.

The game is a sprawling adventure game in the Zelda vein. You fight enemies with your twin powers of "paint" and "thinner," solve puzzles and find hidden items to resolve quests in order to enlist the help of others and advance to your eventual end goal, which isn't exactly clear from the demo. Along the way you will encounter various characters from the Disney archives, all presented in their original colors (including black and white), and you will occasionally delve into scenes from cartoons past, like the platforming level based on the classic Disney cartoon Steamboat Willie.

The platforming can be challenging, but it's supposed to be, according to the designers. The idea behind Epic Mickey is that you will have at least two ways of solving every riddle, and resolving every quest. You can create solutions with paint or destroy obstacles with thinner. If you're looking for an item, you can attempt to scale a difficult platforming section, for example, or you can finagle the item from someone else. One solution involves an investment of time, the other, perhaps of honor. Or money. Or ... whatever. The point is it's up to you - to a point.

While the length of the demo wasn't enough to provide a clear vision of how exciting the complete adventure would be, it was enough to pique my interest and to remind me that of all the game designers to have been called "genius," Warren Spector is the most deserving. Beyond being a triple-A title by a veteran developer for a major entertainment company, his latest game represents the realization of some of the most innovative and controversial videogame design philosophies ever espoused.

It's at once a very safe, commercial creation - a Disney game for the Nintendo Wii - and a daring gamble. At a time when most other developers are reaching for the bigger, better faster, most realistic games that can be made, Spector and his team of wizards at Junction Point are eschewing technological evolution for technology's sake, purposefully restricting player agency, AI innovation and graphic design, in order to create - gasp - a better game.

Here's another shocker: Although the project was until very recently a closely-guarded secret, we should have all seen it coming. Warren Spector has, for years, been proselytizing his evolving design philosophies, writing about them, publishing manifestos and lecturing at GDC. We've collected many of his ground-breaking thoughts below, and later this year, gamers everywhere will get a chance to taste the fruits of his mental labors. Until then, read on for a taste of what's in store, and why the master thinks this will be the greatest game he's ever made.