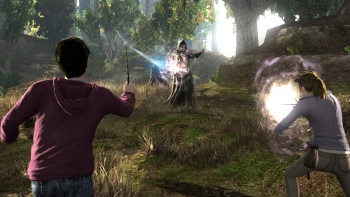 If there's a successful movie out there that appeals to males aged 18 to 35, you can bet someone somewhere is wondering how to make a game out of it. From Krull and The Dark Crystal to Avatar and the new Harry Potter, the gaming industry has always been quick to adapt successful properties from the silver screen to the computer screen and, with few exceptions, they usually suck. But why is that? Is there something inherent in the process of adaptation that ensures most games based on movies will be terrible? Frankly, yes. While there are certainly some notable exceptions, it's been hard to come up with any games that we thought were better (or even as good) as the movies they were based on.

So why is that?

Well, let's talk about the two mediums first. Movies aren't games. I know that may not be the most profound statement anyone has ever uttered on the pages of The Escapist, but it's still worth saying. Movies rely primarily on images to engage audience interest. Sure there are other crafts and techniques that moviemakers employ to hold our attention, but it is first and foremost a visual medium that communicates primarily in a visual way. Contrast that with videogames which, although they have a strong visual component, rely more on the player's interaction with the world as their main point of attraction and contact. So right away we're talking about two forms of entertainment that might share many superficial elements but still differ from each other at their very foundations.

The process of adapting a movie to a game then is a form of translation, of selection, and of interpretation. What is the easiest part to transfer? The action, of course. Action works very well in the visual medium of film, and it also works well in the interactive medium of videogames. So simply isolating action sequences from a popular movie and then using them as the basis of a game level isn't terribly hard. What is hard is making a five-minute action sequence the basis for a half-hour game level. In expanding and stretching the film's classic action sequences, the developers sometimes make what was a thrilling experience while you were sitting in the theater feel tedious and monotonous when you're sitting on your couch or at your desk. How much time does Harry spend in direct combat with Voldemort? Have you ever had a boss fight that was as brief?

Additionally, the encounter between the movie's hero and a handful of villains loses some of its impact when you multiply those villains by the dozens or even hundreds. John McClane may have only killed a handful of terrorists in Die Hard, but those sorts of small enemy numbers just don't work in the videogame market. The problem is that merely throwing more enemies at the player doesn't heighten the emotional intensity. In fact, it has the opposite effect, turning each kill into meaningless rung on an ever lengthening ladder.