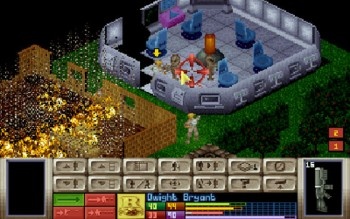 I've been wanting to say this for a while now and, since Firaxis finally admitted it was working on an X-COM sequel, this seems like as good a time as any: X-COM: UFO Defense is the greatest game ever made. It's a bold claim, particularly for such an old game, but X-COM was years ahead of its time and no game since has ever managed to improve on it.

For those who don't know -- and given that it was released in 1994, that may be quite a few of you -- X-COM: UFO Defense (originally called UFO Enemy Unknown in the UK) was an alien invasion game that combined a comfortably familiar B-movie tone and the early 90's extraterrestrial paranoia captured in shows like The X-Files. You lead an international team tasked with investigating and combating an alien invasion.

You begin by shooting down tiny scout ships, but soon end up stopping full-on invasions of major world cities, and eventually take the fight directly to the aliens themselves. Each month the nations of the world add to or subtract from your budget based on how successful you've been, so there's tremendous pressure to do well. You use this money to pay for soldiers to fight for you, scientists to unlock the secrets of alien technology, and engineers to build the tools you need to stop the invasion. At first, it's just hand grenades and rented jet fighters, but you'll soon graduate to flying suits of armor, mind control weapons and your own custom-built UFOs. You'll also need to expand your operations, opening up bases around the world and shooting down aliens over the skies of Toronto, Berlin or Sydney. As in most great strategy games, there's never enough time or money to do everything you want to do, and barely enough to do all the things you absolutely need to do to stay alive.

If this simulation of logistics and management was all there was to X-COM, it would still be one of my all-time favorite games, but what moves X-COM into I-want-to-have-its-babies territory are the tactical battles. See, every time a UFO crashes, or aliens invade a major city, or you find a hidden alien base, or the aliens find one of your hidden bases, you get to take charge of the battle in a turn-based format. You land your dozen or so troopers on the field and have to hunt down each and every alien on the map.

Long before they were popularized by other games, X-COM made use of destructible environments, true fog of war, morale system, individual stats, veterancy, line-of-sight and a host of other innovations we take for granted these days. Your troopers got better at certain tasks and were even promoted if they survived. Come back from a mission and you might find that one of your guys was faster, or could carry more stuff without getting weary. What really sold the whole experience was that you could rename your troopers. I always named them after people I actually knew, which made it all the more intense when the perils of combat began to thin the ranks. It was the hundreds of little personal stories that unfolded during the tactical game, and the overall strategic context of the campaign, that make X-COM the greatest game of all time.

I bought the original version, I bought the rerelease bundle when it came out, and I recently bought the digital bundle on Steam. There aren't many things I've bought more than once - the Beatles' albums, the Star Wars movies, a few favorite books - but X-COM is well worth everything I've ever paid for it over the years. When Firaxis finally admitted it's in charge of the remake, I was confident the team could pull it off. After all, this is the studio that relaunched another of my all time favorites, Pirates!, and managed to bring it up to date without losing anything that made the original game so loveable. But it's also the studio that proved it's still willing to take chances with its core franchise with Civilization: Revolution and the recent Civilization V. So while part of me wants to say "Just update the graphics and maybe the equipment interface," another part of me is actually interested to see Firaxis try to shake things up a bit.

The funny thing is, even with the dated graphics and terrible interface, I keep coming back to X-COM. In the 17 years since the game's first release here in the States, only a handful of games have even come close to capturing the same spirit. There was Jagged Alliance, of course, as well as Shadow Watch and the tragically overlooked Silent Storm. And while those games, in their better moments at least, may have been as tactically satisfying as X-COM, they lacked the personal element of fighting back an alien invasion alongside your sister, and your English teacher, and the cute girl you had a crush on at work. That's what made X-COM work for me. As long as Firaxis gets that part of the game right, I don't see how they can go wrong.

The Escapist Presents: The Final Round of March Mayhem 2014! Valve vs. Firaxis! GameFront 10 Comments