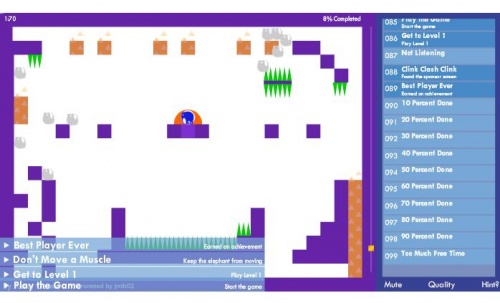 I managed to resist the siren lure of Achievements for a while, but when they came to World of Warcraft I was forced to admit what many other gamers have realized about themselves: I was an Achievement Whore.

Incidentally, that's exactly the mindset that Armor Games are poking fun at with Achievement Unlocked, a charming browser game where you control a tiny blue elephant and the only goal is ... earning Achievements. Some of my personal favorites are "You found the Developer's Favorite Spot," or "You entered the Konami Code!"

One can't help but wonder if it's slightly ironic to be satisfied with earning every single Achievement in a game that specifically teases gamers who hold that frame of mind.

Achievement Unlocked is the brainchild of John Cooney (Jmtb02) who heads up game developer for Armor.