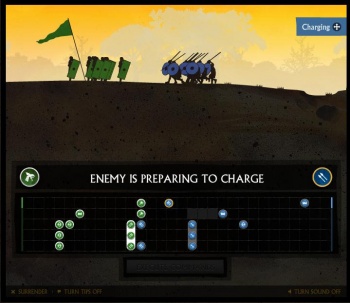 1066 is one of the most important dates in all of British history - William the Conquerer led his army of Normans across the Channel to invade England, and his ensuing defeat of the English king Harold II and conquest of the land would be a historical turning point. For Britain, it would mark the beginning of the Middle Ages.

So what better way to promote a TV show about the events than with a flash game dedicated to it? 1066: The Game isn't the first time Channel 4 has created a tie-in browser game; Bow Street Runner was actually one of Escapist Senior Editor Susan Arendt's favorite games of 2008.

1066 lets you play as one of three armies - the invading Normans, the defending English, and the marauding Vikings - and try to defeat your opponents in battle. It's half strategy game, with you giving orders to your squads, but there's also an interactive component as well: You'll need to order your archers to fire on a given angle and power (which can be hard), you'll need to play a quick-time event to help bolster your troops in battle, and perhaps most entertaining of all, you'll need to actually type out the insults you're yelling to attack your enemies' morale.

Of course, they can attack your own morale with their own taunts, and if a unit has its morale reduced to zero, it'll flee. Which can be a bit frustrating. Still, 1066 has a very nifty aesthetic, and a rather high production value, so it's certainly a fun time-waster for this Friday. Our English readers can enjoy playing through this pivotal moment in their own history, as we celebrate totally kicking their ass.