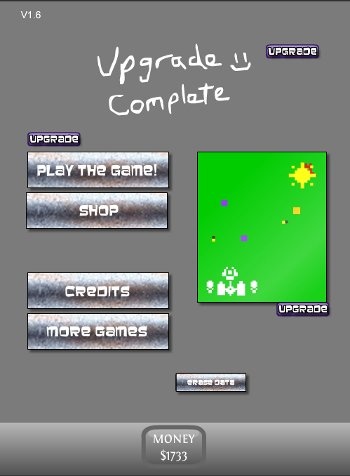 Breaking down the fourth wall is not something that most games do. The separation between the design of a game and the audience is a necessary evil when they are often separated by thousands of miles and a system of tubes. But Upgrade Complete tears down that wall by letting you upgrade the game through playing it, and the designers are trying to make a point by doing so.

Upgrade Complete starts off by giving you some money and letting you buy game components like menu buttons and a title screen. The interface looks crappy at first and the graphics are purposefully bad. The "game" in Upgrade Complete is a series of 20 waves of Space Invaders-like sprites and you predictably must shoot them with your ship. Each enemy you shoot drops a nugget of gold which converts to money when you catch them. The real fun of the game is choosing what you buy with the money you collect. If you want to upgrade your ship, you can and will eventually need to do that to get past all 20 waves. But if the 8-bit graphics are pissing you off, you can save up your cash for a graphics update and, voila, the game magically looks better. Other upgrades include an achievement system and a mute button (I wish I bought that before I bought the music upgrade.)

Upgrade Complete is good for an hour or so of mindless alien shooting and upgrading the game is strangely addictive. When you finally buy all of the upgrades, the game delivers a backhanded message to its audience, asking them to rate a game on how fun it is, rather than the complexity of its upgrade system. My only complaint is that if that was the point that Armor Games was trying to convey, then they shouldn't have made buying the upgrades so dang fun.