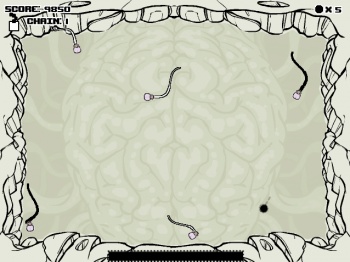 Grey Matter is a strange beast. On the surface it appears to be a very standard reflex-based action game, but after a few minutes of game time, the player find himself unconsciously making simple, but quick, strategic decisions. The premise of the game is simple: the player must hurl his character into the bodies of the enemies to destroy them while avoiding their various attacks - almost the opposite of a standard game of this type.

That alone would make for a rather boring game, however, so the design is given an additional layer of complexity by allowing the player to link three kills into a triangle, destroying any enemies inside and giving bonus points. This is, in fact, the only realistic way of getting a large enough number of points to buy the powerups needed to survive later stages.

The game, created by Edmund McMillen (Spewer and Gish, among others) and Tommy Refenes (Goo!), has a theme of mental conditions. At times, the player is confronted with screens such as "stress" or "acceptance," accompanied by a brief description of topic. These screens only increase the pressure, considering the game is already quite difficult.

The game is a challenge, but it rewards a skilled player with satisfying feedback and a subtly layered complexity. Destroying brain cells has never been more fun.

Stumbling Into the Kingdom of Loathing Robert Janelle 36 Comments