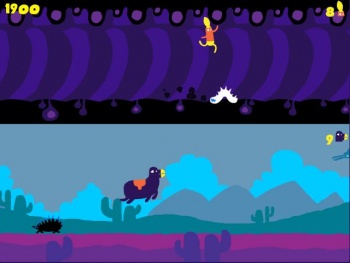 There are plenty of quirky web games out there, but it's not often you come across one as enthralling and strange as Poto & Cabenga. All you have to is to run forward, collecting feathers to increase your score, and avoiding enemies along the way, but, of course, there's a twist.

While out for a ride on his trusty steed Cabenga, Poto is swallowed whole by a massive flying snake whose belly is filled with beasties. Meanwhile, outside the snake, Cabenga is running for his life trying to avoid getting gobbled up. In Poto & Cabenga, you're effectively playing two games at once, as you control both characters at the same time. You control the whole game with one button, but the controls for the characters are reversed, so what makes Poto run makes Cabenga slow down, and vice versa.

What looks like a simple platformer becomes a tricky balancing act as you guide both characters through their respective environments. Enemies come from both sides, so you can't let either get too far ahead or too far behind, although you get a ton of lives so you can learn the ropes before the games turns up the speed.

Oh, and it's really pretty, which, as I mentioned last week, is always a bonus.