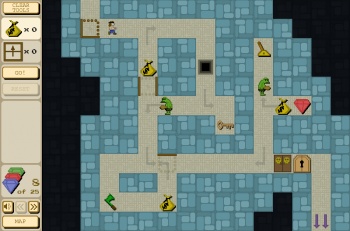 In the land of Talesworth, a vicious dragon menaces the innocent townsfolk, terrorizing villages and demanding they give it every last bit of treasure as tribute. Because, you know, dragons are just dicks like that. Naturally, a lair filled with treasure is a tempting target for would-be adventurers, but most have met their doom ...

Questy is our adventurer, out for fame and riches (well, riches anyway), but there's one problem: He's an idiot. We aren't talking standard "good-hearted, loud-mouthed Idiot Hero," either: Questy is so stupid that he can only run in a straight line until he hits a corner.

Of course, that's where we come in. Your job, as the player, is to guide Questy to safety: Plot a course, gate off areas you don't want him to run through, and drop treasure bags to take advantage of Questy's monumental love for phat lewtz and get him to turn.

It's a fun little puzzle game, and while it starts off easy enough some later levels are fairly tricky to figure out. Red levers open red doors, green axes kill green ogres, and if you can, why not pick up some shining dragon gems along the way?

I mean, it isn't like the dragon doesn't deserve it or anything.

Critical Miss: All About the Thrones The Wooster 63 Comments

Where the Funny Things Are Veng Xiong 28 Comments
Comments on