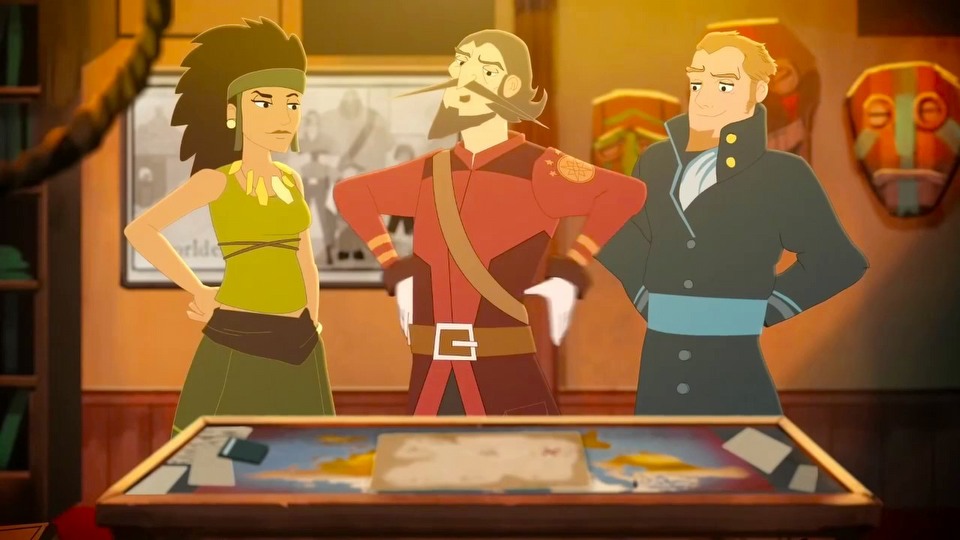 I've never been very good at strategy games. While the rest of the warring world shored their defenses, gathered their units, and marched to combat, I lingered in the background, muttering ceaselessly to my war advisers about how annoying it was that there was a part of the map still blotted by the unknown. The little patch of black that represents the fog of war was my true enemy, and the rest of the nations were just distractions, my real goal was the unknown.

I was more of an explorer than a combatant, and found the joy of exploration was my true calling. So when I sat down with Renowned Explorers: International Society, I found something of a home for myself in the spiraling of the compass and parchment maps of lands unknown. Nestled somewhere between turn-based strategy game and RPG, Renowned Explorers: International Society is a game about assembling a small squad of explorers, and pitching out into the great unknown to discover great secrets, and greater renown.

Out on explorations, the explorers have tips from the Explorer's International Society for treasures and intrigue out in various locations, waiting to be found, and must travel on foot to arrive at their destination. Between them are several points of interest, which can have anything from challenges for the various squad members, encounters with enemies, or caches that contain anything from treasures to traps, enemies to intrigue.

From the map, players choose which node to travel to, where supplies are expended en route. When supplies run out, party members start accruing maladies and debuffs that impact their ability to continue. If the player hazards upon an area in which there are challenges, they can pick which party member to attempt a challenge, along with listing the rewards for and percentage of success. Success nets additional rewards, such as better post-exploration perks, new equipment for the explorers, or more supplies to continue picking up bonuses. Failure often comes at the cost of any rewards whatsoever, or party Resolve.

The loss of Resolve hits hard, as Resolve is a finite resource, that dwindles every time a major challenge fails, or a party member loses all stamina in combat. The only time players can get resolve is picking an extra 2 every successful mission. As a result, the game can be punishingly difficult, and can often get that way very quickly.

That said, the difficulty is a part of the game's aesthetic, which is exceedingly well done. Renowned Explorers: International Society is incredibly charming. The game characters themselves are very animated, and emote with big, cartoonish gestures and endearing vocal calls. Combat isn't just limited to attacks, but also discussion. Everything in battle is divided between aggressive, friendly, and deceptive actions. The actions the players take impact the mood of the battleground, and ending battle with one prevailing mood over another has differing effects depending on party layout, combat parameters, and events throughout that expedition.

Combat is staged on a hex-based battlefield, with enemies and player parties occupying various hexes. Players and enemies move and choose an action, often speaking to or attacking the player party (and affecting their mood and stamina bars), and in turn being spoken to and attacked. Each expedition has its own flavor, in which the majority of encounters will specialize in being aggressive, devious, or friendly. Parties suited to counter these moods will success handily, where parties ill-suited for the fight will often die without hesitation or much mercy.

However, true to form, exploration should never feel easy. It should fight back, clawing tooth and nail against every success. The victorious won should be hard fought and well-earned, and that's something that Renowned Explorers neither hold back on nor apologizes for. The bosses especially, those that guard the expedition's ultimate treasures, come with an infinite sea of enemies, and are themselves tanks on the battlefield. Every exploration that succeeds comes with the renown of a fantastic discovery, and comes at the end of a grueling trail, bathed in the sweat and blood of the explorers that faced it.

So, I find myself again lancing out into the unknown, blade in hand, wading in through sheer force of will and resolve, ready to take on any whatever challenges life hands to me. Not without its fault, I find Renowned Explorers: International Society is an amazing companion to an adventurer's spirit. Strong-willed and headstrong, scathingly tough in between moments of cheers, indulgent excitement, and exactly the kind madhouse insanity that accompanies facing mountains of challenge in pursuit of getting to find out what's lurking in the unknown.