The Escapist is big on indie games, not only for the innovation they bring to the games space, but the value they bring to gamers. Standard AAA titles go for about $60, but indies often sell at half that or less. While you might not get the 100 hours of gameplay in a $20 indie game you'd get from the likes of Fallout 4, there are a ton of titles that offer a huge number of hours of entertainment for very little cash, making great gifts for the budget-conscious, Secret Santas, or for those people you like enough to buy a present, but not quite enough for a $60 game. No judgment here. We've all got them. Check out some of the most impressive indie titles we've seen this year to find the right one.

In case you're looking for something other than indie games for your beloved geek, check out our collection of gift guides for the whole nerd spectrum. 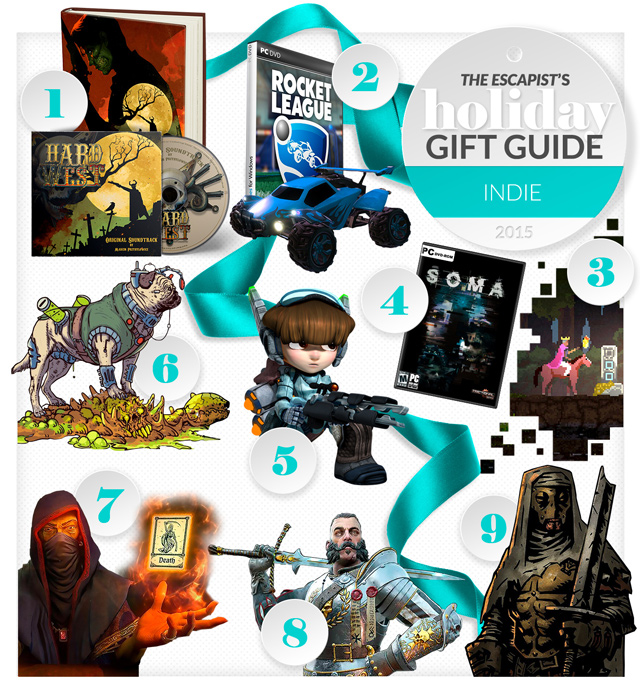 Taylor says: I'll be the first to admit that turn-based strategy games aren't for everyone. Unlike many of their closest peers, they're largely unapologetic. Little mistakes in the genre cast long shadows, and even a five second lapse in judgment is all it takes for an otherwise good mission to end in blood. Given that, though, the strange, supernatural, alien setting of Hard West is a good fit for the unforgiving shootouts of the west.

Fans of X-Com will find the strategies and management very familiar, and fans of Westerns will be right at home with the aesthetic and soundtrack. Hard West is a rough and tumble game that doesn't mince words about its difficulty, is no stranger to violence, but is still a great game to struggle over. Fans of Valkyria Chronicles, however, might find it a bit short and the segmented campaign a little brief. Where it works, though, it works very well. It's smart, clever, tough, and quick experience, where the shootouts can seem to end in the blink of an eye, and always leave satisfaction in their wake.

Josh says: I haven't played a sports game in ages, and the car-based games I've played in the past few years I can count on one hand, so when I saw the car-based soccer (futbal, if you prefer) simulator, Rocket League, I wasn't entirely sure I cared. Then I played a match and I was hooked. The concept is simply "soccer played with a giant ball and rocket-powered cars."

Whether your gamer cares about sports or cars, Rocket League transcends the normalcy of the more popular sports games into the lunacy of its premise. Scoring with a bicycle kick in a rocket car is way more entertaining than doing so with a person in FIFA or the like. Zipping around the field, up the walls - across the ceiling even - only to make the perfect hop and boost to score a point isn't reserved for the pros (though it helps) and even making the effort will keep you entertained for ages.

Nick says: For gamers who like strategy defense, Kingdom provides the feeling of it by making a powerful enemy to threaten your lands with. You get a sense of pride seeing your village grow into a full fledged town. Building it up from a small camp make you bond with the hard work you put into it. You find a reason to want to defend it at all costs. It's the Dark Souls type of a challenge. But Kingdom wraps it into a tower defense, side scrolling, survival sort of set up.

Kingdom is a game meant for a friend who thinks video games are too easy. It's the right mix of a challenge where there's not excessive punishment. But Kingdom isn't afraid to take you down a few notches. The pixel graphics and basic tower defense may make you think Kingdom is simple. But it will surprise you at how much the premise is able to elaborate on that throughout the game. Kingdom is all the "rage" but none of the "quit."

Marshall says: Horror games have made an impressive comeback in recent years, but very few claim anything special in the story department. SOMA is 2015's exception, a unique concept refined to near-perfection across a seven hour campaign. Sadly, I can't actually share much of this story without revealing spoilers. But what's truly impressive is that SOMA can surprise you multiple times without falling into the usual plot cliches you expect from the genre.

SOMA takes place on a mostly-abandoned underwater base, now filled with robotic beings set on ending your life. But the monsters - while disturbing - aren't SOMA's true horror. It's the way the game questions consciousness and morality in a world where sentient thought can literally be stored on hard drives. What's worse, the game has no answers for you. That means SOMA's moral choices and conundrums will stay with you long after finishing the game, reconsidering what it means to be human.

Sure, that might get in the way of festive feelings. But SOMA is still one of the best video game stories of 2015, and worth gifting to a survival horror fan.

Taylor says: Assault Android Cactus comes out of the gate with the kind of energy and personality that's infectious. A vibrant, jubilant, personable experience that doesn't ease off the throttle for even a moment, and makes playing alongside the game's frantic energy feel simultaneously comforting and adrenaline-pumping. Not at all unlike a favorite childhood movie or a few hours in a theme park, Assault Android Cactus strikes right to the heart of what made childhood so much fun, and can instantly bring out the childlike joy of spending a few hours and dollars in an arcade.

For gamers who like bouncy, bright, action games full of bullets and color, Assault Android Cactus manages to capture the atmosphere while still presenting its players with a coherent story, and a reason to keep playing long after the story's over. Fans of Geometry Wars and Beat Hazard will find a lot of familiarity, and the amazing polish means each failed mission will encourage just one more play, rather than fits of frustration.

Josh says: When Skyshine's Bedlam launched earlier this year, I was in the midst of playing a swath of games, and hadn't planned to play it immediately for lack of time. But when my wife took to the wasteland to see how she'd fare, I was forced to change my mind immediately. Skyshine's Bedlam is brutally difficult, and isn't for the easily-frustrated, but gamers that love a challenge will find plenty of fun - and challenge - in Skyshine's Bedlam.

Stuck in the wasteland of a Mad Max-style post apocalypse, you're leading a vehicle full of survivors out of the clenched fist of the local despotic warlord and to the promised land of Aztec City. Failure means certain death, and can come in many forms. You'll be balancing food and fuel along the way, and permanent death for soldiers means that you've got to take combat very carefully to survive. Don't even consider this for a gamer that likes to take things easy, but if your looking for something that's going to make your gamer rage quit and then rage restart out of spite, Skyshine's Bedlam is where you want to be. Well... not geographically. It's a terrible place.

Josh says: I was late to discover Hand of Fate when I wrote about it earlier this year, but I couldn't have been more pleased with what I'd found. Equal parts tactical exploration and hack-and-slash combat, as the name suggests, luck plays a big role in what happens during a game of Hand of Fate, but it doesn't ignore the player's choices and risks taken often net huge rewards. Sometimes, however, you'll just lose to the smarmy, mysterious dealer because that's what Fate would have happen. You can fight your way back from some bad situations, but when your luck runs out, it's time to start over.

Hand of Fate will appeal far more to gamers who like to take their time and ponder the best move, rather than those who favor action over contemplation. The combat, while common, is not the focus of the game, and is certainly not where its strength lies. The antagonist is "The Dealer," a veiled man of unknown origin that knows that your fate and his are inextricably bound together. He'll lay out the map for each level, decide what monsters you have to fight during an encounter, and draws up your curses when you anger the wrong priest or demon. Kindness can only get you so far, though, so if your gamer likes to make tough decisions and balance morality with survival, Hand of Fate might be just the right fit.

Ron says: Warhammer: End Times - Vermintide is what you get when you cross Left 4 Dead with the Warhammer universe and stir briskly. It embodies the four-player co-op of the former, while maintaining the dark, foreboding atmosphere of the latter. Four players select from five classes and fight their way through hordes of Skaven ratmen using everything from swords to flintlock pistols to fire magic. Stronger, specialized rats appear at times, and the maps offer a number of different challenges.

In addition, a loot system gives you the chance to earn new gear and weapons for your characters, and a crafting system lets you upgrade and repurpose excess gear. Although the AI bots leave a bit to be desired, playing Vermintide with your friends is easily one of the best co-op experiences of the year. It's a great gift idea for players with lots of gaming friends, or those who just love anything Warhammer.

Josh says:Darkest Dungeon is an exception in this year's guide because it's not even finished yet, but Steam's Early Access allows gamers to get in early, and this is one of the gems that makes the whole Early Access program worth it. If your gamer's into a gothic setting and enjoys a serious challenge, Darkest Dungeon will put them in charge of a dungeon-crawling clan with an eye for loot.

Whether they prefer a stoic paladin type or a wacky court jester, the cast of characters spans the spectrum. Your gamer will need their wits about them for the turn-based combat system and randomized dungeons. Open the wrong box or pick the wrong fight and the whole party may just meet their bitter - and permanent - demise. It's like Final Fantasy meets Diablo meets Dracula, Frankenstein, and The Mummy.