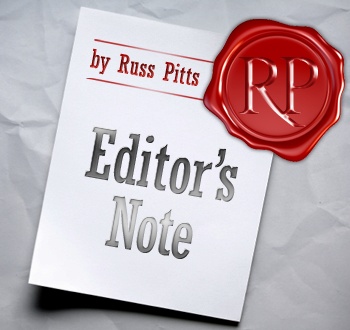 As I write this, members of Team Escapist are preparing to celebrate our hard-won 5th birthday by running around shooting each other with foam darts. As I put on my headphones and turn up the music to drown out the sounds of their glee, I'm left to wonder: What is it all for?

Last year, on the event of our anniversary, I had some pretty harsh things to say about the game industry, gamers and us here at The Escapist. I accused The Escapist and other hardcore game media outlets of "pacing around in the echo chamber of our own circular arguments," which is a fancy way of saying we'd been talking to the wrong people about the wrong things. I called gamers "a bunch of reclusive dicks." Ouch.

I don't take any of that back. I believed it a year ago and I believe it now; not that all gamers are dicks, of course, but there is a tendency toward dick-i-tude we'd be fools to ignore. For our part, we're working to temper that sentiment in our forums, and in our own lives. After all, nobody likes a jackass.

As far as stepping out of the echo chamber, at The Escapist we've tried to address the issues surrounding interactive media at the industry level while keeping a foot solidly planted in the consumer arena, bridging, as I said to Allen Varney recently, the gap between living the dream and having the dream. In that sense, the most important aspect of The Escapist, apart from everything else we do, is the opportunity that we provide for you, the members of our community and our audience, to experience our content as a meaningful addition to your life and to make browsing a website as interesting and fun as playing a game - and to interact with it.

Over a decade ago, Douglas Adams, author of The Hitchiker's Guide to the Galaxy, wrote this:

[T]he reason we suddenly need such a word [as "interactivity"] is that during this century we have for the first time been dominated by non-interactive forms of entertainment: cinema, radio, recorded music and television. Before they came along all entertainment was interactive: theatre, music, sport - the performers and audience were there together, and even a respectfully silent audience exerted a powerful shaping presence on the unfolding of whatever drama they were there for. We didn't need a special word for interactivity in the same way that we don't (yet) need a special word for people with only one head.

The suggestion that interactivity is "new and different" ignores the fact that interactive entertainment was, in fact, the norm prior to Thomas Edison. The invention of broadcast entertainment, in the early 20th century, changed America's and then the world's view of entertainment. Prior to that, your entertainment was directly in the hands of your community, through local theater and sporting events, and it was very interactive. Even more so than what we have now. Today, you may watch a video then comment about it after the fact, but at the theater, if you don't like what you're seeing, well, you can do something about that - you can yell, boo or throw things - and that interactivity directly affects the performance.

Take, for example, this excerpt from an excellent review of performance artists Mike Daisey's monologue The Last Cargo Cult:

The monologue which lasted a staggering 2 hours and 10 minutes (with no interval) was at it's root, about the nature of money. ... You see, he gave us something that is impossible for any human, especially poor ones like myself to resist. He gave us money. ... The money did not belong the midsummer. It did not belong to the venue. It did not belong to Mike. At least, not yet. The money, was in transaction. It was his fee, his wages, his payment, for doing the show. A glass bowl appeared on the table. It was up to us, it seems, to decide, if he really deserved it. We had a choice: Give back exactly what we had. Give back less. Give back more. Give back nothing at all. Our choice.

What would you have done?

What did I do?

Part of Daisey's brilliance is that he's recognized for over a decade the realization to which it's taken some of us the same amount of time to awaken: at the root of it, all entertainment is interactive. Broadcast media took control of the entertainment out of the hands of local communities and placed it into the hands of a very small cadre of people in one, single location. If you weren't in Hollywood, you had no interactivity save your own internal reaction to the product, or perhaps what you were able to share via the water cooler or with others in your own living room. That was a huge shift, but American society as a whole was shifting away from tight-knit communities, so if anyone noticed - outside of Greenwich Village or SoHo - they didn't care.

So, to my mind, the internet hasn't created anything other than a way for now disparate and far flung communities of like-minded souls to collaborate and communicate. Interactivity is inherent in the human experience. To say it isn't, to suggest that this is something new is merely a testament to how successfully Hollywood disenfranchised the rest of the world. Community today isn't about geographical proximity, it's about shared interest, and the internet communities are simply taking back what they've been deprived of for generations.

My own background is in theater, so this is a very meaningful intersection for me. I was acting on stage before I could drive. I founded a theater company at age 23 (and made money, if you can believe that). I wrote one-act movie parodies and we performed them on borrowed stages and gave away free beer. It was a riot.

One night we played to two people. I'll never forget that. We decided to improvise the whole play on the spot - changed everything. We made it better, in fact, and kept trying to outdo ourselves for the rest of the run.

On later evenings, when audiences finally appeared, they were treated to a new show each night, often influenced by their presence, feedback and amount of drunkenness (or ours). If audiences approved, they'd let us know, and if they didn't, they'd let us know even more loudly. One night, during an especially raunchy bit of improvisation, people stood up and left halfway through. To us, that was a clear sign that it was time to change direction.

The author and screenwriter William Goldman once said in reference to creating entertainment that "nobody knows anything." This is an oft-quoted bit of wisdom because it's the truest thing anyone has ever said about how to please an audience. People pretend to know, they analyze and predict, but at the end of the day the only sure way to gauge audience reaction is to tell the joke and then wait for laughter. Our job at The Escapist, therefore, is not to tell you what to watch, what to read or what to enjoy, but to simply to pay attention; to provide the tools and interaction necessary to encourage you to talk to us and then listen.

We think we've done a pretty good job of that over the past year. Look for more in the months ahead. For the moment, however, we're going to take a little time off - some time just for ourselves - and chase each other around with air-powered and foam-filled combat weapons. Happy birthday to us.

For your enjoyment on this auspicious occasion, we've assembled a wealth of content shining a light entirely on us. Correspondent Nick Halme spent a weekend in Victoria, B.C. with LoadingReadyRun and shares his story; the staff of The Escapist answer questions you submitted; Allen Varney interviews the founding members of The Escapist team on the origins of our enterprise and Max Steele deconstructs Yahtzee. We hope you enjoy.

The Big Picture: Orphan, Black? - A Look At The New Annie MovieBob 91 Comments