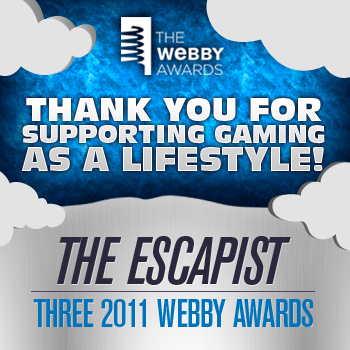 Today, it was our great pleasure to receive notice from the International Academy of Digital Arts and Sciences that The Escapist won three of the four Webby Awards for which we were nominated this year.

Before this morning, The Escapist was already a three-time Webby winner, and now we're bringing home three more of the coveted awards, adding three to our current total of ... three. They say that three is a powerful number, and today I have no choice but to agree.

To say that all of us here are ecstatic would be an understatement. This summer will mark the sixth year of The Escapist's existence, and for all of those six years we have worked long hours against hard deadlines in the fervent belief that what we are doing here has merit. That it is worth something. That the passion we pour into our craft and the medium of gaming itself was worth the effort. This year, after our third Webby win, we can no longer doubt that it's true.

More than that, though, this Webby win is a powerful statement that videogaming has taken its rightful place as a mainstream medium. That those who game are just as important as those who watch, listen or read. That we, as gamers, are a powerful force in the entertainment landscape and that we won't be denied.

The three awards we received today are:

The voters of the IADAS decided that, of the five nominees for "Best Games-Related," The Escapist was the best. You, the members of our audience and broader digital community agreed that we were also the best "Games-Related" website, but also - and perhaps more importantly - that we were the best website representing "a lifestyle." That lifestyle is gaming, and it's a lifestyle we not only espouse, but that we share with you and have shared for going on six years. At The Escapist, we don't just write about and make videos about games, we play them and love them as much as you do. That love of games as a medium informs everything we do, and is the guiding star by which we steer the whole damn thing.

When I took over as Editor-in-Chief of The Escapist in the summer of 2009, I wrote that I firmly believed that you, our audience, were the heart of everything we do. I still believe that, and I am humbled by your decision to award us the Webbys People's Voice award in both categories for which we were nominated.

I speak for everyone here at The Escapist when I say that, as much as the endorsement of the Academy means to us, your votes mean more. Thank you for supporting The Escapist, and thank you for continuing to believe in what we do.

Smile and Nod: The Escapist at the Webbys Russ Pitts 11 Comments