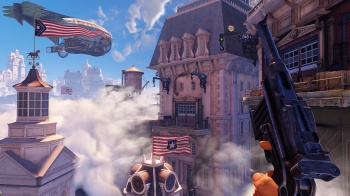 At developer Irrational's recent event, I had the opportunity to not only take on the first few hours of BioShock Infinite, but also put some questions to Drew Holmes, one of the title's main writers.

As impressed as I was with Infinite during my play time, Irrational still has some work to do to convince lapsed BioShock fans that the new title is worth their time. The original BioShock entry is now over five years old, but Holmes is confident that Infinite will channel the same feeling in fans.

"BioShock Infinite is really the spiritual successor to BioShock 1, and I think - without spoiling anything in terms of the narrative, we want to keep that close to the chest - I think that players will want to see what the thematic links are. Nothing is on accident, everything we've done is intentional. As you play through the game, the reasonings behind certain choices that were made [in development] and literally everything you see becomes clear.

As I noted in our hands-on preview, Infinite is both familiar and foreign at the same time. It feels like a BioShock title through and through, but its setting and characters are a world removed from the leaky halls of Rapture. Naysayers might insist that this change of scenery takes away from the franchise, which thus far has been all about isolation and survival. Holmes explained that, for Irrational, the decision to pull the series out of the depths of the ocean was an easy one.

"For us as a company, it's been about pushing forward and innovating, and not repeating ourselves. We didn't want to just do BioShock all over again. We wanted to challenge ourselves and figure out what new gameplay elements we can bring in," says Holmes. "What can we do in terms of building not a dead city, like Rapture, but a living, breathing city where people are alive and people are talking to you."

"The setting is integral in what makes a BioShock game. Rapture was such an important character in BioShock, and Columbia is the same way. It's about creating an immersive world that players want to explore and find the backstory of, and sort of lose themselves in this fantastical setting that we've created."

But as bright and colorful as Columbia may be, the story quickly turns dark. The blind patriotism of the city's inhabitants breeds intolerance, racism, and the worship of a single individual as a prophet and all-knowing entity. If some of this sounds familiar, it's because the same concepts were at work in the original BioShock title, but Infinite pushes them even further.

"[The first BioShock] was a look at what happens when you follow an ideology to its extreme. It was about extremism in terms of objectivism and Ayn Rand's philosophy," Holmes explains. "There are similar things happening in the story of BioShock Infinite. It's about an ideology taken to its extreme, and the unintended consequences that crop up from issues like that. I think if there's one thing that thematically links the two, it's this rigid belief in a philosophy and refusing to recognize other viewpoints that tends to lead to downfall."

The original BioShock title made waves (no pun intended) when it asked you to decide between saving or slaying the most innocent of Rapture's inhabitants, the Little Sisters. Unfortunately, the story plays out nearly identically regardless of what choice you make, save for the ending cinematic where you are cast as either a villain or a hero. BioShock Infinite also offers you choices, but rather than simply offering a option between right and wrong, Irrational wants to challenge your viewpoints and make you examine the middle ground.

"[In the first BioShock] it was a very binary choice, and it was a choice that lost meaning over the course of the game," Holmes admits. "The very first time you're presented with that choice it's very powerful. 'Oh my god, what am I going to do? I have make a decision to kill or save this little girl.' And by the tenth time you've done it in the game, you're not even thinking about that choice anymore. You've become numb to it. So what we wanted to do this time around was present players, whether it be in a binary option or through events that crop up during the course of the game, with a moral gray area. Present it in a way that's going to force players to think about that situation and really question why a certain character is making a decision and what they would do if they were in those shoes. I think it's important to present all sides of a problem and show that there's not always a right or wrong answer to something."

But creating a world where living characters provide the backstory and tense situations- rather than relying solely on diary pages and short voice logs as in previous titles - means a greater emphasis on voice work. I asked Holmes how this affected both his own role as a writer and the work of the Irrational team as whole. It turns out that script for Infinite not only dwarfs that of the original BioShock title, but they're so far apart that a comparison is almost laughable.

"That was one of the reasons I came onto the project. I started in March of 2012. As Ken [Levine] started to flesh out this world and look at the characters of Booker and Liz, and start to formulate the idea of the story we wanted to tell, there was a realization that 'Holy shit. This is a lot. This is a big game.' Just the Boardwalk level alone is about two to three times the size, script wise, of the entirety of BioShock 1. That's just one level."

I'd like to thank Drew Holmes for taking the time to chat with me during the event and provide a bit of insight. If you're hungering for more details about the game, you can read our full hands-on preview of BioShock Infinite.