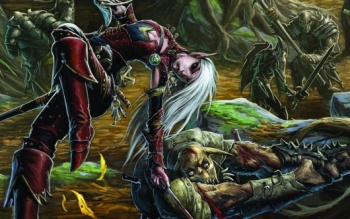 The partnership with Paizo is smart move towards accomplishing that goal. Pathfinder's influence in the tabletop RPG market has grown substantially in the last five years as it challenges the establish brand of D&D. The fans of Paizo have an Apple-like devotion to the company, so setting Dancey's MMO within its world of Golarion was largely responsible for the Kickstarter campaign's success. In just three days, the campaign hit the funding goal of $50k, and ended in June 2012 with 4,212 people putting up more than $300 thousand. A new Kickstarter campaign is now underway to help fund the full development of the game. Dancey and Goblinworks hopes to raise $1 million to help speed it up and the new campaign is nearing the halfway point of funding with less than 30 days remaining. With two fundraising drives this year, he's worried his audience might experience "Kickstarter fatigue" but he hopes Paizo's fanbase remains supportive.

But beyond what audience the Pathfinder brand can deliver, there's a location within Paizo's setting that fits perfectly with Dancey's sandbox MMO. Pathfinder Online takes place in a region called the River Kingdoms, an area of fertile land that's ruled by bandit kings and petty lords who routinely backstab and depose each other. "The reason we're using the River Kingdoms in particular is that it was designed from the beginning to be the place that would be the most [like a] sandbox," he explained. "It does have existing NPC factions and kingdoms, but none of them are very stable. And the background of that area is that those factions and kingdoms change often. The design of the game is that new kingdoms would rise and there would be a constant turnover of the power brokers in that area." So while the players of Pathfinder Online will be able to control the region's fate, it won't mess too much with the established IP.

Dancey did not spend the summer idly. With the $300k Kickstarter cash in hand, he hired programmers to begin work on the code. Dancey planned to whip something up and use the tech demo to shop around for more investors, and, at the time, he was confident the team would continue iterating to get ready for a release in 2013.

"I'm not going to pick a day or a month, but I'm going to say it's going to happen in 2013," Dancey said with confidence this summer. MMO development usually occurs at a snail's pace. Blizzard worked on World of Warcraft for four years, and BioWare recently devoted a similar chunk of time to The Old Republic. Why did Dancey think his game could be made so quickly?

"That's the advantage of doing a sandbox versus doing a theme park," he explained. "If we were doing a theme park, we'd have to design pretty much the whole game before we could ship it ... two genders, five races, sixteen classes and all the appropriate spells, magic items, effects, character animations. It's just massive the amount of stuff you have to do for a theme park.

"But with a sandbox game, we have to design systems, not content," said Dancey before the tech demo was created.

A 2013 release still seemed ambitious to me. That's why I wasn't surprised when the latest Kickstarter mentioned a window between 2014 and 2017. What changed to push back the date so much? Well, it was in part because the first Kickstarter raised nearly triple what they were asking for. "We became convinced, in large measure due to the success of our first Kickstarter, that we might be able to raise a large portion of that budget directly from the community," he said. "That simplifies things for us enormously and allows us to keep more creative control over the project and its budget and timeline."

That means Dancey didn't need to go out and raise money from the typical sources for games - "angels, private equity, partnerships with larger developers or publishers, maybe venture capital" - but not having the large amounts of money from those sources pushed back the development schedule. "We took the risk that pushing things back would be justified by the benefits of having non-traditional funding for the project," Dancey said, but he still hopes the present Kickstarter can jumpstart the process. "Based on the investment we have in-hand, we can project starting the Early Enrollment in the early part of 2015 and hitting the Release milestone in early 2017. The $1 million Kickstarter moves that timeline up, to mid-summer of 2014 for Early Enrollment, and early 2016 for release."