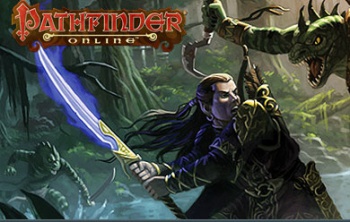 The most important step for Pathfinder Online is what will happen after the Kickstarter campaign, assuming it is successful. The first people who inhabit the sandbox will undoubtedly make marks on the game that will quickly become permanent. Dancey wants to seed his game with people who can put viable social structures in place before the general masses log in. "We [will] have a very small number of people that we allow into the game at launch and those people are carefully chosen to be a great mix of people who want to do exploration and development and domination and adventuring," said Dancey. "And over time as those people will put down roots and develop infrastructure for markets, for adventuring companies, and for meta-game organizations."

The term he's devised for these pioneering players is Crowdforging, and everyone who contributes at least $100 will be involved. Having a small group enter Pathfinder Online first will allow the team to slowly build the population to test servers and fix bugs, but, perhaps more importantly, the initial players will actually be guiding of the game's design. The plan is for the developers and these seed players to collaborate on everything from social features to combat systems to economic markets.

"The new people who come into the game will experience something that feels much more organic and alive and real to them because it's going to have all this straight player-created stuff in it," Dancey said. None of that would be possible if the Pathfinder Online team had to create all of the content a theme park MMO demands before release.

"The age of the $50-$100 million AAA Theme Park MMO is nearly over," he said. "One by one, they have been released, had a spike in subscribers as people piled in to try them, then a collapse as those folks burned through all the theme park content and left. The solution is to make a sand box game, where you invest in tools and in ways to let players interact, and you can ship it fast and monetize it fast and let it grow over time."

Dancey isn't naïve to think he's the only one who thinks this is where MMOs are going. "We already know that Sony has scrapped their plan for EverQuest III and gone back to the drawing board to make it a sandbox. I'm sure that there are people at Activision/Blizzard, EA, Ubisoft, THQ, etc. who are all thinking along the same lines." He hopes Pathfinder Online has enough of a jump on his competition to be a success.

The thing is, he doesn't need much to make it work. "EA defined 'success' for Star Wars: The Old Republic as a sustained subscriber population of 1 million players. They didn't achieve it," he said. "I define 'success' for Pathfinder Online as having about 30,000 paying players at the end of 12 months of live operations, and about 100,000 after three years. I believe that the market is more than capable of generating those kinds of numbers."

It's not a very good time to start making a huge theme-park MMO. Failures like Funcom's The Secret World and Curt Schilling's Copernicus project - not to mention the disappointment of Star Wars: The Old Republic and the drop-off of WoW's population - have stifled any publisher's desire to invest in developing an expensive theme park MMO. Gamers just don't seem to want to play them as much as they did. In fact, the only MMO to continuously grow its population year over year is EVE Online. Perhaps that's because a fully realized economic system, with plenty of player input and rewards, and the social structures that grow to support that market is actually what keeps players engaged. Crafting and camaraderie is what makes them stick around, and Dancey is betting a similar design will work in the fantasy sandbox of Pathfinder Online.